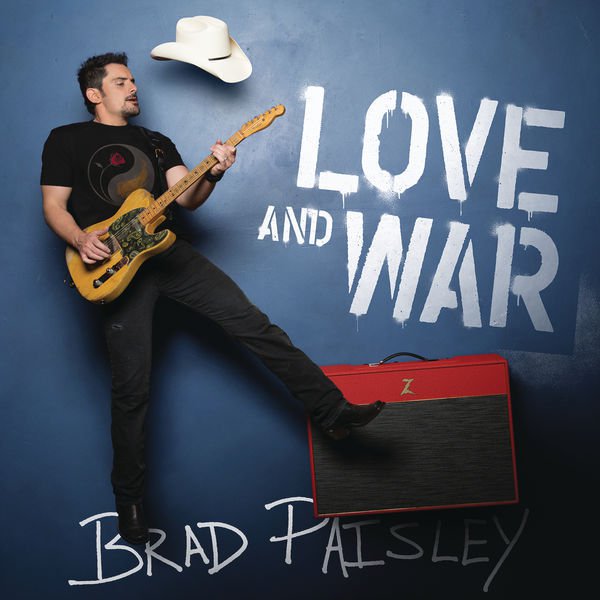 Country megastar Brad Paisley is no stranger to hit records. Since his debut in 1999, Paisley has sold 12 million records and counting, and racked up 23 number one songs. He’s just released his eleventh studio album, titled Love and War, which serves as the follow-up to 2014’s Moonshine in the Trunk.

Recorded in a studio outside Nashville and produced by Paisley and Luke Wooten, Paisley collaborated with musicians from every genre to create his most versatile album yet. With everything from classic to modern country and R&B to soul, Love and War has a little bit of everything in its 16 tracks.

The album opens with the small-town tribute “Heaven South,” which was one of the first songs released from the project. The mid-tempo track leads the album, describing everything found in a small country town: “Beer battered chicken, sweet ice tea / Night crawlers, crickets and a Zebco 33 / Old Glory waving at you / As you’re driving by the court house / And it’s just another day in Heaven South.”

“Last Time for Everything,” another pre-released single, takes you through each stage of life, with the message to take nothing for granted. Paisley goes through each unforgettable moment, like “Using a fake ID at a college bar,” and “Throwing the ball with the first dog you ever had.” An electric guitar solo breaks out before Paisley sings, “Kissing goodbye on her porch and driving away / Introducing her as your fiancee / Getting woke up at 5 am to see if Santa came / There’s a last time for everything.”

“Go to Bed Early,” a standout on the album, proves there is nothing like a classic Paisley love song. The smooth tune and wide range of Paisley’s vocal in the song complement each other as Paisley sings about longing to spend the entire night with the one you love.

The album takes an upbeat turn with “One Beer Can,” and “selfie#theinternetisforever,” and features numerous tracks with superstars like Mick Jagger (“Drive of Shame”), John Fogerty (“Love and War”) and Bill Anderson (“Dying to See Her”). Multi-Grammy Award winning rapper & DJ, Timbaland, is featured twice (“Grey Goose Chase” and “Solar Power Girl”) and gives the album an upbeat, urban flare.

The album’s lead radio single, “Today,” is a clear hit, with close to 15 million streams on Spotify. The message of the song resonates with many, as Paisley sings about the good times in life outweighing the bad.

“Gold All Over The Ground” is a sweet musical interpretation of a poem first published in Johnny Cash’s book, Forever Words. Paisley begins to wrap up with album with a powerful message in “The Devil Is Alive and Well.” Paisley sings about the troubles of today and pulls at your heartstrings with lyrics like, “Surf the web, turn on the news / Same old story everyday / Hateful words that we all use / So much anger / So much pain / I don’t know if you believe in Heaven / I don’t know if you believe in Hell / But I bet we can agree / That the devil is alive and well.”
Love and War Track Listing:

Listen to Love and War below: