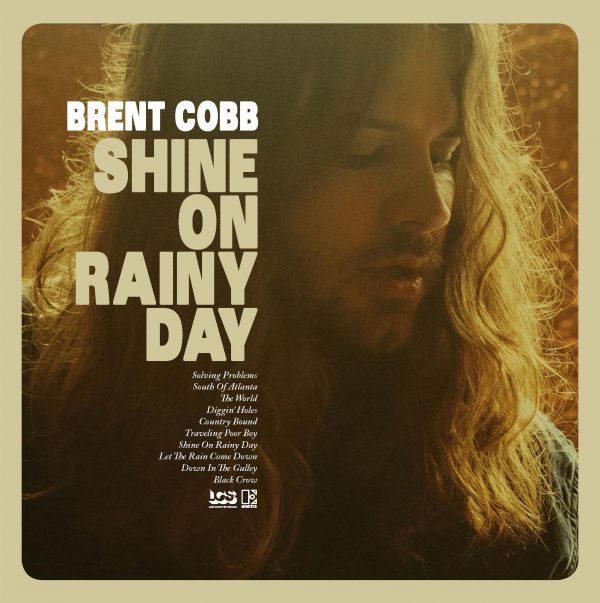 Brent Cobb has long been part of the Nashville songwriting scene, but today marks the release of his exquisite debut solo album. Produced by Dave Cobb and featuring collaborations with fellow songwriters and friends alike, Shine On Rainy Day serves as a tasteful ten-track narrative of Cobb’s arrival as an artist and the lessons he’s learned on his way from rural Georgia to Music City.

The Process, or Lack Thereof

Brent Cobb writes songs. But the thing about Brent Cobb is that by “writing songs,” he really means “hanging out with friends who also might happen to be musically inclined.” He’s always had an organic approach to songwriting, and prefers the old-school Music Row co-writing methods he’s heard about from the likes of Don Schlitz: friends are drinking at a bar, someone pulls out a guitar to play something written to impress said friends, collaboration ensues and a great song naturally emerges. Similarly, Cobb has a “group of folks” he writes with, and while some are more popular writers, many are simply friends. “I don’t want it to feel like you’re going to the doctor’s office,” Cobb explained over the phone earlier this week. “I’ve always liked the community and camaraderie.”

As it turns out, they’re damn good songs, and Cobb has compiled an impressive list of cuts over the years (Luke Bryan, Little Big Town, Miranda Lambert, and more). When it came time to make his own debut LP, he teamed up with his mega-producer cousin Dave Cobb to create Shine On Rainy Day, available today via Low Country Sound/Elektra.

Oddly enough, Cobb didn’t write the one song that both artist and producer had at the top of their tentative tracklists: “Country Bound.” He was, however, present while his father and uncle wrote it, and Cobb cites it as the first songwriting process he remembers witnessing. “We were in Cleveland, Ohio, where my mama’s from, and I was watching snow for the first time out the window while my daddy and my uncle were writing ‘Country Bound,’” he recalls. The track is certainly a standout, centering on heartfelt homesickness and ending with a foot-tapping guitar breakdown, and its backstory serves as a testament to Cobb’s strong family ties.

The rest of the album was indeed written by Cobb and friends – notable collaborations include the heart-mending title track (written with fellow artist Andrew Combs), and “Solving Problems,” a lighthearted we’ll-get-there-when-we-get-there tune Cobb wrote with his close friend and former Nashville roommate, Scotch Taylor.

“Diggin’ Holes,” an entertaining extended metaphor that breaks up the album’s heavier nostalgic tracks, spurred from commiserating over girl problems with co-writer Casey Wood. It evolved into a half-humorous, half-serious tongue-in-cheek anthem “about a dude who can’t get his life right,” describes Cobb. Dave Cobb’s signature sound is especially obvious here, and adds a lighter vibe to the self-criticizing lyrics.

The lovely “Traveling Poor Boy” is the only solo-written song in the bunch, and took Cobb more than a year to finish. “I remember initially writing that first verse and chorus in about an hour, but I guess I hadn’t lived enough yet to write the second verse,” he suggests. A year later, at 2 a.m., the second verse “just fell out,” he says. (It was well worth the wait: “Say, old man moon / I heard that you get blue too / It must be lonesome way up in the sky / The stars seem mighty proud, if I were you I’d hate a cloud / All they ever do is hang around and cry.”) The other tracks, thankfully, had much shorter timelines. “The good ones come easy,” Cobb says.

The Definition of Country

Cobb grew up in rural Georgia, and his upbringing is evident everywhere from his undeniable Southern accent and long wavy hair to his descriptive lyrics (“There’s a town in south Georgia so humble and small / If you sneeze driving through it, you won’t see it at all / Every Sunday at supper they’re bowing their heads / Thankful for snap peas and skillet cornbread”).

Cobb, and therefore his album, truly typifies the word country. So how did he manage to create such a tasteful, artistic, and modern collection of songs that mention moonshine and loblollies and yet never veer toward hokey or hillbilly? “We are so traditionally country,” Cobb volunteers. “If you came to my hometown, to my family’s land, it’s kind of like going back in time a little bit. I want to capture the stuff I loved about the way I grew up, because it’s universal if it’s done correctly.” Cobb’s efforts to convey the “richness” and “soul” of the life he’s known are successful – his obvious honesty (really, you couldn’t make this stuff up) is endearing and adds to the overall quality and authenticity of his project.

For your hidden backwoods Bayou badass: Let the Rain Come Down, Down in the Gulley, Black Crow
For your road trip back home: Traveling Poor Boy, Country Bound, South of Atlanta
For beers on the porch: Solving Problems, Diggin’ Holes
For love lost and found: The World, Shine on Rainy Day