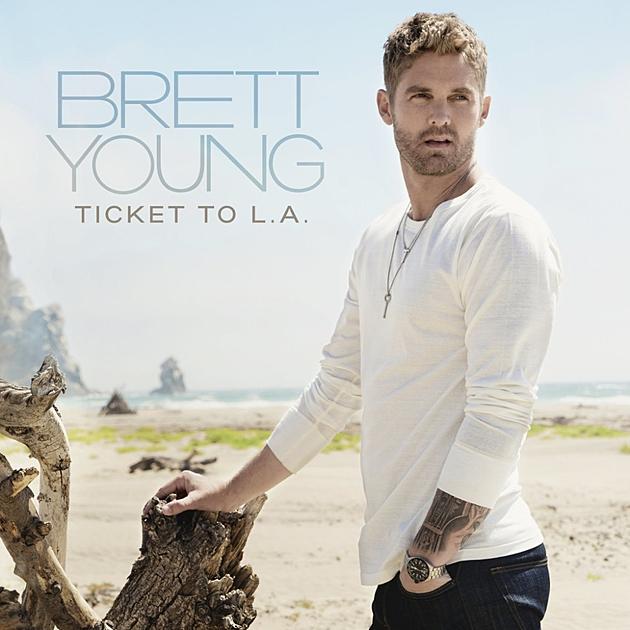 Brett Young has released the title track, “Ticket to L.A.”, ahead of his forthcoming sophomore album due out next month. The song is a sweet, romantic tale of an encounter with a stranger while waiting in New York’s JFK airport. Thanks to a series of weather-related delays and a few drinks, the two spend hours getting to know each other and by the end, he’s completely captivated by her. He sings “It was midnight in the middle of JFK / Trying to take my mind off the falling rain / I was saying anything to make her laugh / Never wanted anything so bad / She got me wishin’ that she could stay / Doesn’t even know that I missed my plane / Now there ain’t a single thing I wouldn’t trade / For a ticket to L.A.,” Eventually, her flight begins boarding and they are forced to part ways but not before giving him her number. By the song’s end you’re left with the hopeful feeling that the two will meet again.

Young achieved incredible success with his self-titled debut album which earned him four No. 1 hits including “Sleep Without You”, “Like I Loved You”, “Mercy” and “In Case You Didn’t Know” which reached Triple Platinum status.  The 2018 CMA Awards New Artist of the Year nominee, has said that this new project will be more “uptempo” and “playful.”  In a press release, Young says “It’s been four and a half years that I’ve been in Nashville.  A lot has happened, the first record has been really good to me, and I’m really, really proud of it. But just having a new batch of songs – it’s like breathing new life almost.”  He goes on to explain the inspiration for the new album and title, “I decided to name the album Ticket to L.A. because flying home to Los Angeles has become such a big part of my life.  A  lot of the first record reflected a kind of hard point in my life when I was moving from Los Angeles to Nashville, but I’m in a completely different place now. I’m so happy, and I think you can really hear that shift on the new record.”

Young is a co-writer on 10 of the 13 tracks on the forthcoming album produced by Dan Huff.  The project boasts an impressive lineup of collaborations with some of the industry’s top writers including Ross Copperman, Ashley Gorley, Shane McAnally, Sean McConnell, Nicolle Gaylon, and Jon Nite to name just a few.