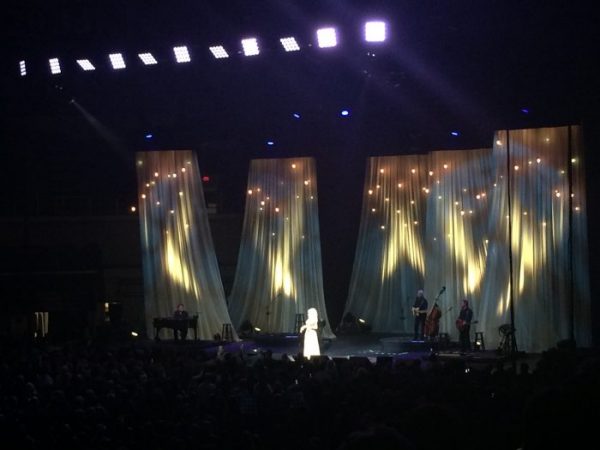 Dolly Parton has been performing for decades – more than half a century. That’s a long time – thousands of stages, countless audiences, setlist after setlist. But last Wednesday at Huntsville’s Von Braun Center, her performance was so energetic and earnest that you could’ve easily been convinced she was hitting the stage for the first time. She delivered an entertaining, nearly three-hour show, singing an extensive list of hits peppered with new material, and always offering a funny story or honest anecdote between songs.

The name of her tour (and latest album) is Pure & Simple, but the word “simple” must be slightly redefined when it comes to Dolly Parton. The stage was indeed bare, except for long billowing curtains and the occasional prop. But, of course, Dolly – spot lit, dressed in white and sequins – was glittering, a literal beacon of brightness at center stage.

The unbelievable thing about a Dolly Parton show is that her humor nearly overshadows the songs, which are legendary themselves. She sang her hit “Jolene,” but the most memorable part was her hilarious recounting of the song’s namesake and how Jolene might feel about Parton’s recent 50th anniversary with husband Carl Thomas Dean: “Maybe she can have him for the next fifty years,” she said, sending the crowd into one of many eruptions of laughter.

Parton described (for probably the umpteenth time, though one would never suspect) her rural Tennessee upbringing, rattling off the names of her 11 siblings and recalling the leaky roofs and crowded beds of her childhood. She invited the audience to appreciate “good mamas” and “good daddies,” and offered heartfelt praise for her own parents. “She’d tell ya anything and make it sound good,” she said of her mother; “Gonna stand up and do this one because my daddy deserves a standing ovation,” she said before honoring her father.

She fiddled and danced her way through “Apple Jack” and “Rocky Top,” bouncing from one side of the stage to the other and proudly completing a sax solo backwards – as in, standing with her back to the audience. (Cue more enthusiastic laughter from the crowd.) Sometime between a serious song’s conclusion and the inevitably hilarious introduction of the next, she said matter-of-factly, “Time to come back down to earth, I reckon.”

But that in itself defines Dolly Parton’s most superstar quality of all. She is simply out of this world. She became famous for doing it all, and today, even decades into her storied career, Parton is still able to prove (emphatically, repeatedly, energetically) why she’s captivated audiences from the very beginning.

She closed with the epic “I Will Always Love You,” but not before leading the crowd in a dance-inducing collection of her most well-known hits (“9 to 5,” “Two Doors Down,” “Here You Come Again”). On this tour, she proves her uniqueness and rare talent, but also her ability unite her audiences with a simple song. Parton will continue playing shows on her “Pure & Simple” Tour through the end of 2016.