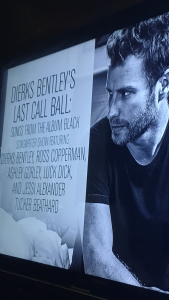 As Dierks Bentley prepares for the release of his eighth studio album Black tomorrow, May 27th, he is taking New York City by storm. Making appearances on The Tonight Show with Jimmy Fallon, local radio stations, and The Today Show Summer Concert Series. On Wednesday night Bentley entertained a packed house at New York City’s Highline Ballroom in one of the city’s most fashionable areas, the meatpacking District, with his “Last Call Ball – Songs From The Album BLACK.” Fellow songwriters Luke Dick, Ashley Gorley, Jessi Alexander, and Ross Copperman (who also produced the Black album) joined him onstage to share some of the songs and stories behind them off the new album.

Tucker Beathard, currently on tour with Bentley, opened the night with a short acoustic set playing a few a few of his original songs, including “20-10 Tennessee,” “God And My Guitar,” and current single “Rock On.” The 21-year old Beathard shared a few words of advice with the crowd, saying, “Chase your dreams or die trying. That’s what I’m doing.” 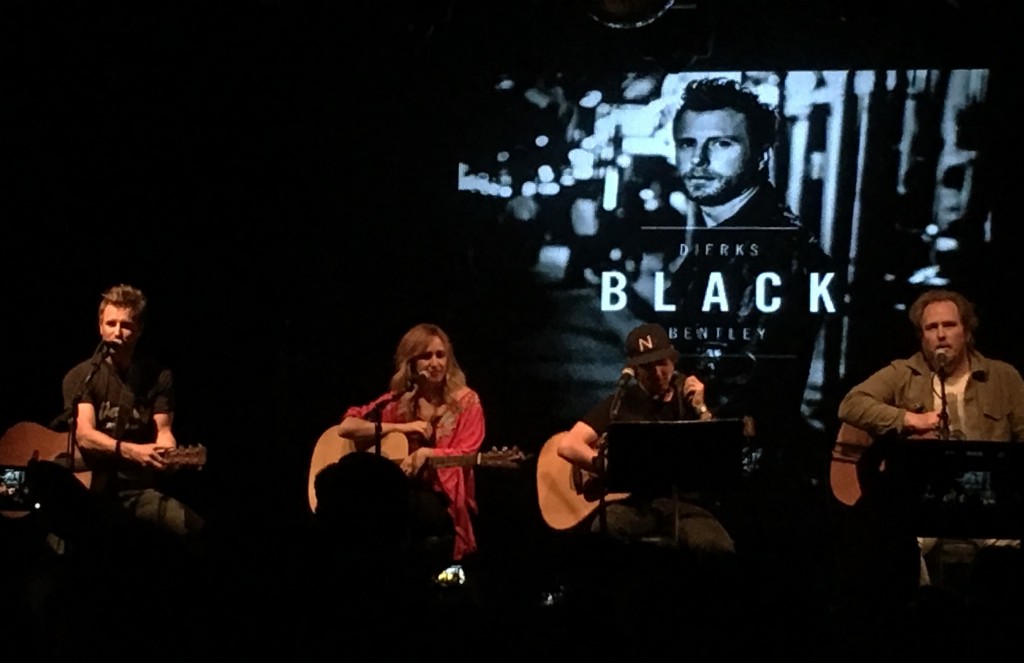 When Bentley took the stage he sat to the far left, letting his fellow songwriters take center stage. He jokingly referred to the fact that he’d be sitting the entire show which “is strange for me, since I’m used to running around on stage and stage diving.”

The night kicked off with Bentley playing “Black,” the title track off the album. Luke Dick and Bentley then shared vocals on a song called “Roses And A Time Machine,” written by Dick and Adam James. Dick explained that “country needed a time machine song” but also admitted that finding words to rhyme with Craigslist, DeLorean and “edjamacation” wasn’t easy. Bentley followed up with “What The Hell Did I Say,” “Light It Up,” and “I’ll Be The Moon.”

Switching focus to his songwriting pals, each took turns playing a few of their hits, which have been cut by the likes of Blake Shelton, Luke Bryan, Cole Swindell, Eric Church, Brett Eldredge, Thomas Rhett, A Thousand Horses and Miley Cyrus. Singer/songwriter Jessi Alexander played “Mine Would Be You” and “The Climb” with the crowd on its feet singing along.

A highlight of the night was undoubtedly Jessi Alexander sharing the moving story behind the Lee Brice hit “I Drive Your Truck.” Inspired by the loss of his son in Afghanistan, a father was asked “what are you going to do” to which he responded “I’m gonna go drive his truck”. Alexander explained that the song was written 2 years to the day of his death. Bentley then played “Riser” (written by Travis Meadows and Steve Moakler) to continue with the perseverance theme.

Lightening the mood, Bentley told Ashley Gorley to “do something new man, blow it up.” Gorley responded with the Thomas Rhett hit “T-Shirt.” Bentley played “Freedom” and fan favorite off his Riser album “Drunk On A Plane” later in the evening as well.

Bentley closed the show commenting that “New York City showed the love” and then broke into recent two-week radio #1 “Somewhere On A Beach.”

Black is available at midnight on iTunes.