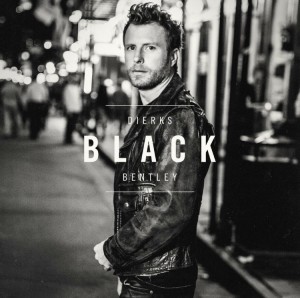 Dierks Bentley’s eighth studio album Black released today via Capitol Records Nashville. Bentley has writing credits on 7 of the 13 tracks on the album, which was produced by Ross Copperman.

Bentley describes Black, which happens to be the maiden name of his wife Cassidy, as a relationship album. He tells USA Today “this record became less about ‘I’ and ‘me’ and more about relationships and what a crazy journey they are… As I got into it, I started getting in touch with the mystery, the darker edges of the heart.” Bentley says that the title track “Black” was his foundation for the album and he formed the rest of the songs around it.

In a recent interview with Entertainment Weekly, he explains his association with the color black. “Some people associate red with love, but to me red is for an earlier stage of a relationship. Black is much deeper to me. It’s certainly the sexiest color and this record has a sexiness, in a well-worn leather-jacket kind of way.  It’s not glossy sexy – there’s a realness to it”.

The album is a narrative of the journey one takes in a relationship. The title track “Black” is a sexy song and portrays the passion present at the beginning of a relationship and sets the tone. Love is never completely neat and perfect, and this album is a reflection of that imperfection. The tracks are aligned in such a way that a story unfolds. It explores all of the feelings that are experienced within a relationship – newness, excitement, loneliness, broken hearts, revenge, acceptance, and finally happiness found in a long-term relationship.

The fun first single released off the album, “Somewhere On a Beach,” is the point at which the character gets revenge and runs off with someone else. “Freedom” continues that high but then shifts towards questioning what he truly wants in “Why Do I Feel.”

The album even covers the touchy stereotypes between how men and women handle breakups with “Different for Girls” featuring Elle King. Though the song yields to a rather limited perspective, it does point out the unfair, but all too real way men and women can typically react. Bentley says the female perspective on the album “makes it a conversation between guy and a girl. Sometimes it’s harmonious and sometimes it’s two people clashing but it’s always there.”

By the final two tracks, “Light It Up” and “Can’t Be Replaced,” you’ve completed an arc that ends with the realization of what’s truly important in life and love. The album is successful in looking at relationships from all angles. Bentley has never allowed himself to be put in a box and this album is certainly no exception.

Black is available for pre-order now on iTunes.

4. “What The Hell Did I Say” (Copperman, Josh Kear, Chris Tompkins)