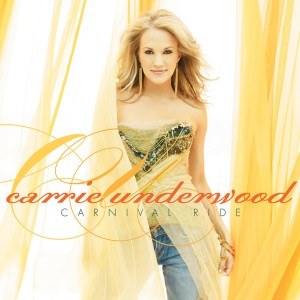 Carrie Underwood’s song catalogue has received some extra love this week with the release of her “Greatest Hits: Decade 1” album.  While the album certainly highlights some of Underwood’s most notable hits, one fantastic song that is not featured on the release–and is rarely ever discussed for that matter–is “Sometimes You Leave.” The track was included on the deluxe edition of Carnival Ride as a Target exclusive.

Chris Tompkins (“Before He Cheats,” “Blown Away”) penned the power ballad alongside former American Idol judge Kara DioGuardi (“Undo It,” “Mama’s Song”) and London-Native Shridhar Solanki.  The diverse group of writers likely explains why the song has an ever-so-slight R&B feel to the production.

In addition to a production style that is unique for Underwood, the song stands out in that it’s one of her more heart-wrenching tunes. It’s certainly true that she is no stranger to dark songs–“Two Black Cadillacs” and “Blown Away” are two that immediately come to mind.  That being said, lines like “all the rain drops in the sky tonight/ can’t compare with all the pain and all the tears I’ve cried” communicate a sense of vulnerability and deep hurt in a way that is largely unmatched in Underwood’s other songs.  It is more typical for her to include songs that channel hurt into anger, as in “Before He Cheats” or “Undo It.”  One of the few tracks that she has that occupies a similarly vulnerable emotional space is “I Know You Won’t,” also on Carnival Ride.  Though its powerful melody certainly leaves a greater impact than “Sometimes You Leave,” which might explain why the latter was left as a bonus track.

Regardless of the reason for its addition as a Target exclusive, “Sometimes You Leave” is well worth adding to your playlist as you cruise back through some of Underwood’s “Greatest Hits” this week.

Previous Post: “Sun Daze”: How Florida Georgia Line Take the Holy Day in Vain and Why Nobody Seems to Mind
Next Post: The Death of Bro Country: 2014 Year in Review