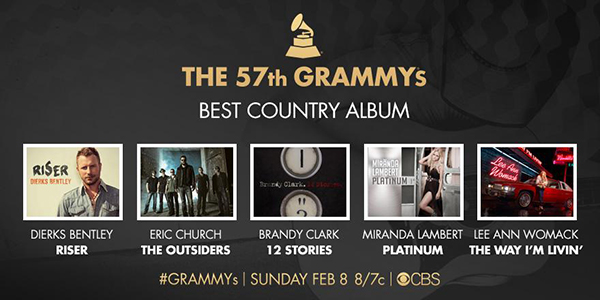 Dierks Bentley has this amazing ability to build a climactic, anthemic hope without coming across as cheesy; “I Hold On” and “Say You Do” being prime Riser examples. Soaring guitars pair with lyrical yearning in Bentley’s “Five,” – “now you’re 600 miles away, and a ten hour drive / but if you called me tonight, I can make it in five.” It’s a triumph of willpower and a nostalgic throwback to the first verse, “yeah, those are the days I miss / a ten minute ride, I could make it in five.” Bentley isn’t brooding, he’s confident, an anthem of hope over experience. “This might sound crazy but maybe you’re thinkin’ ’bout me tonight ’cause I’m thinkin’ ’bout you tonight.” Spoiler alert – at the end, she calls – a reminder that maybe not all sadness ends in re-hearbreak.

From Eric Church’s The Outsiders, “A Man Who Was Gonna Die Young.”

This Church cut is a simply instrumented, vocal-focused track with a thoughtfully written lyric – perhaps there’s a theme here? “A Man Who Was Gonna Die Young” is the live-fast-die-young sequel, a raw reflection on wild days and the woman who probably shouldn’t have stuck around. Though Church’s vocals and the single electric guitar are both sparse, sometimes barely a whisper, they gain at the gritty strength of hard truths: “I always thought I’d be a heap of metal in a cloud of smoke, foot stuck to the pedal / sold for parts like a junkyard rusted out Chevy … fear, I’ve had none / what the hell made you wanna love a man who was gonna die young?”

From Brandy Clark’s 12 Stories, “What’ll Keep Me Out of Heaven.”

Not only is Clark excellent at storytelling, a staple of a great country song, but she’s particularly strong at focusing on a precise moment, creating a three-minute journey through the complexity of emotions of a single second. “What’ll Keep Me Out of Heaven” is, in short, about an affair, but is wrapped in the moment of waiting for the hotel elevator to come and take her up to the deed in question. The hook, “what’ll keep me out of heaven will take me there tonight,” is absolutely perfect, subtle enough to allow for the immensity of the implications. The melody is simple but strong, and the instrumentation complements it, allowing for the lyric to draw as it should.

Lambert’s Platinum is incredibly smart, and “Priscilla,” an uptempo ode to Priscilla Presley and the tribulations of “being Queen of the King” is no exception. Lyrics like “married to a man that’s married to attention” and “Priscilla, Priscilla, how’d you get him to yourself? Between the whistle calls and the Southern dolls it’s enough to put a home through hell” bond the struggles faced by the likes of Lambert and Presley through a fun, upbeat track, which strips the heaviness and presents as the glorious second glass into wine night.

From Lee Ann Womack’s The Way I’m Livin’, “Send It On Down.”

First of all, Lee Ann Womack’s voice. Moving past the obvious, “Send It On Down” is beautiful in its simplicity, with delicate instrumentation that leaves Womack’s vocals in the spotlight. This song is the perfect follow-up to the title track before it, which is a rootsy and excellently constructed sold-myself-to-the-devil song. “Send It On Down” is the humble prayer for forgiveness, a single candle lit with humility and identity lost. “Jesus, can you save me / from going crazy? / I need some help getting out of this town / Are there any answers / up in the hereafter? / Ooh, if you’ve got something won’t you send it on down? / While I’m still able to be found.”

Previous Post: Kick back with Josh Abbott Band’s “Tuesday Night” EP
Next Post: Bluesy, Rockin’ Goodness: The Bros. Landreth’s “I Am The Fool”