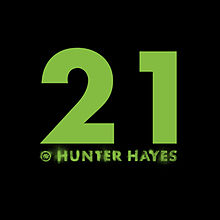 Hunter Hayes has announced that his 21 Project album will be out November 6th, and will be a seven song collection of live, acoustic, and studio recordings. 21 Project is reportedly the first of two non-full length projects that can be expected from Hayes over the course of the next couple of years.

Lead single “21” is currently climbing the airplay charts, and will hopefully become Hayes’ first single to hit the top ten since 2013’s “I Want Crazy”. The 24-year-old’s sophomore project underwhelmed at radio, with “Invisible” scraping the top 20 and it’s follow-up, “Tattoo”, failed to reach even that level of success.

Hayes has been touring alongside Lady Antebellum and Sam Hunt this past year on the trio’s Wheels Up tour.