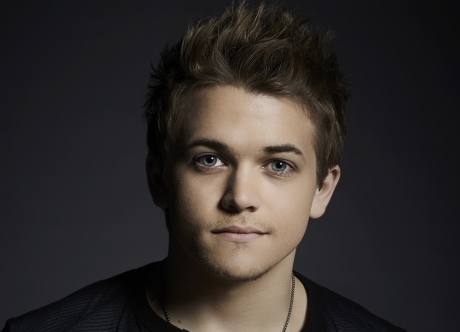 Hunter Hayes released today the third in his series of exclusive digital releases, “Young And In Love.” The song marks the third song Hayes has sent directly to Spotify, with digital downloads available afterwards, completely eschewing releasing a physical product. It’s a savvy move, especially as Hayes’ fan base leans younger and more digitally involved, and could mark a turning point for the way other country artists approach release strategy.

Hayes is known for being a trailblazer with digital strategy and fan engagement; Mashable named him an “Artist That Backs Music With Digital Dexterity,” and he is one of YouTube’s Top 50 Music Artists for 2015. Hayes also has a mobile app, and hosts Coffeehouse Experiences with his fans, where he interacts with them in an intimate setting between shows.

“Young And In Love,” a co-write with Dave Barnes and Dan Omelio, has a slower and more emotive feel, with pop instrumentals and a vocal vibe that mirror One Direction’s “Story of My Life.” Barnes, a Christian artist, wrote Blake Shelton’s “God Gave Me You;” Omelio, a primarily pop writer and producer known as RoboPop, has credits including Maroon 5’s “Payphone,” Gym Class Heroes’ “Stereo Hearts” and “Ass Back Home,” and Keith Urban’s “Shame.”

“Young And In Love” wasn’t originally written with Hayes. The track, originally a Barnes/Omelio co-write, found Hayes as a full demo – in fact, the song, which was originally titled “Young And Dumb,” is still registered only to Barnes and Omelio in ASCAP’s repertory. Hayes altered the title and other lines for his release, receiving a co-write on the track, as well as a share of the publishing.

Such arrangements are common in other genres. An artist will hear a song, alter a line or re-write an entire verse, and claim a share of the song’s publishing as a co-writer. The percentage of the publishing varies, and is negotiated by the publishers involved. In extreme cases, the artists make very minor changes and are rewarded with a small percentage, whether as a vanity credit or simply as part of the bargain in getting a large artist to record your song; in others, a greater part of the song is reworked by the artist, and a larger percentage is attributed.

Without hearing the demo, it’s unclear how much of the song Hayes altered to better fit his artistry (aside from obviously the title/hook), nor what percent of the publishing he now owns. Unlike other genres, Nashville tends to split publishing evenly – in a three-way co-write, for instance, each writer will typically receive an equal third, regardless of how much they contributed to the session – so playing by Nashville standards, it wouldn’t be unreasonable to assume that “Young And In Love” is an even three-way split.

This isn’t the first time Hayes has followed this model with recent releases, which is a surprising move for the 23-year-old. Hayes has helmed his brand heavily around being a strong force in his creative endeavors; on his first, self-titled, album, Hayes played every single instrument and wrote or co-wrote each track. On his follow-up, Storyline, Hayes relinquished control of the instrumentation, drawing on some of Nashville’s strongest session musicians, but wrote or co-wrote each of the tracks himself.

Hayes’ first release in this digital series, his latest single, “21,” bore a similar writing structure to “Young And In Love.” “21,” originally a co-write between Nashville heavy-weights Dallas Davidson, Ashley Gorley, and Kelley Lovelace, was written a couple years back; though the exact date isn’t public, it was posted to YouTube in February of 2013.

For Hayes’ release of the song, a variety of changes were made, some minor and some that strongly altered the meaning or the structure of the song. The full lyrical changes can be found below. 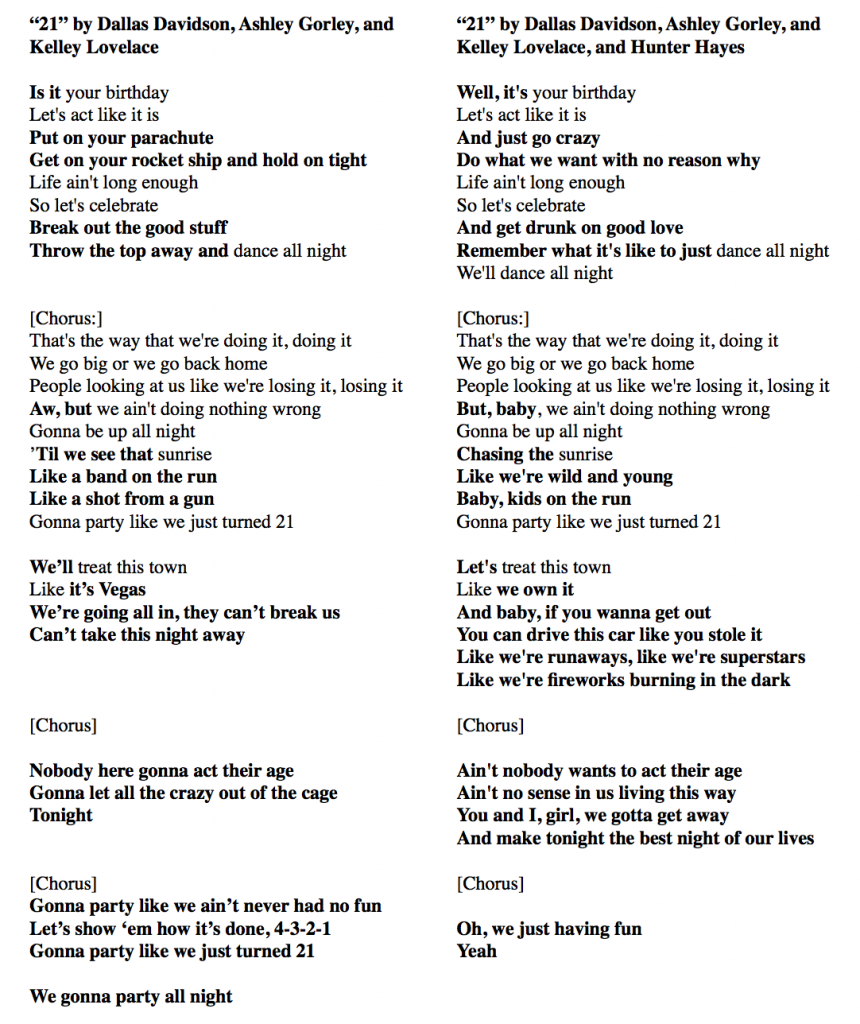 Hayes is far from the first artist in Nashville to alter a song to better fit his sound, but the examples of artists that also claim a writing credit are rather slim; however, especially when a song has a greater number of co-writers, it’s hard to know if all of them were in the room for the original write. With minor changes, it seems that writing credits are typically not granted to the artist, at least in country; Jake Owen’s “Alone With You,” for instance, a Shane McAnally, Catt Gravitt, and J.T. Harding co-write, was originally called “Running With Scissors,” built around the lyrical concept that love is like running with scissors, exhilarating and dangerous. A line in the hook was “you’ve got me running with scissors down the hall, and I know it would kill me if I fall,” the former part of which was changed to “you’ve got me out on the ledge every time you call” after Owen felt that the scissors line just didn’t fit his artistry naturally. Jason Aldean’s “She’s Country,” a Danny Myrick and Bridgette Tatum co-write, first went “she’s from South Cackalacky, can shake her sassafrassy,” rather than “she’s a party-all-nighter from South Carolina.” “That song got written ‘cuz of South Cackalacky, because of the slang, and I finally rhymed it, and then he changed it,” Tatum said during a radio visit. They’re small changes, and definitely not at the level of Hayes’ changes on “21,” but it’s worth noting that neither Owen nor Aldean are listed as co-writers on the songs.

With “21,” the changes seem more extensive. But it’s an interesting move for Hayes, who has in the past prided himself on being at the helm of the writing process. As he continues to set new standards with his digitally-focused release strategy, it will be interesting to compare those releases to pop practices.