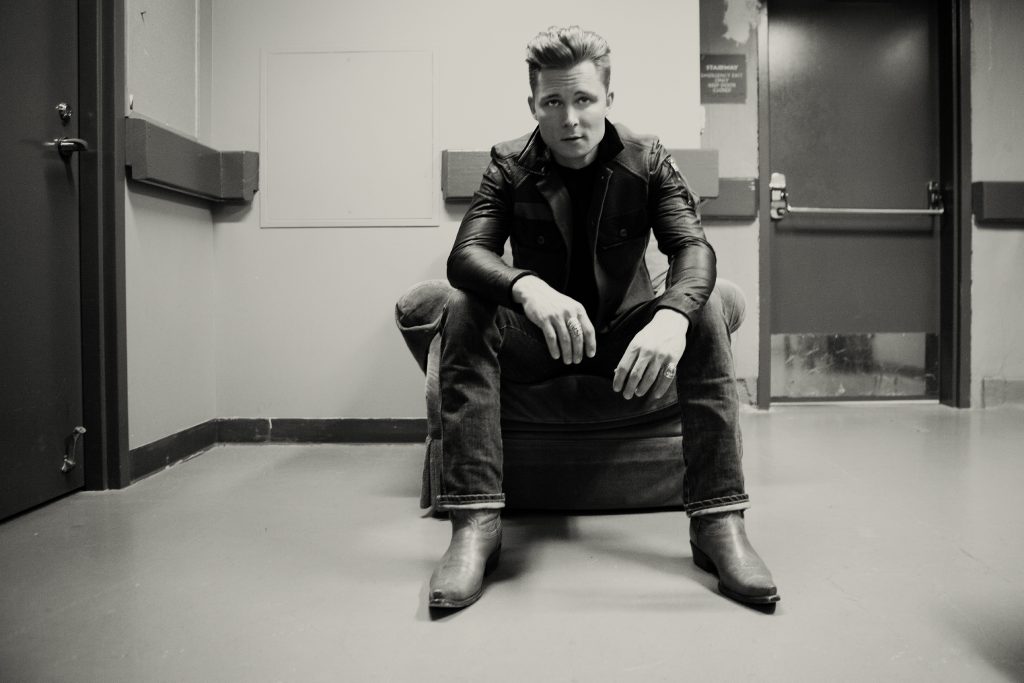 It’s an unseasonably hot day for November – a sunny 80 degrees – when we sit down to chat backstage at Nashville’s storied Exit/In, but Frankie Ballard looks archetypically cool. Planting himself on the arm of a worn couch backstage, Ballard seems to be in a good mood; he’s playing to a sold-out home crowd tonight, he’s got family in town next week for Thanksgiving, and the weather is absolutely gorgeous. “I always hold onto summer for as long as I can,” he says.

The Michigan native is on tour in support of his recent album El Rio, an eleven-track LP infused with rock, blues, and effortless style that may well be one of the year’s best releases. On stage later that night, Ballard is electric, but when we speak he’s surprisingly contemplative, at times pausing almost uncomfortably long to consider how to best phrase a thought or answer a question.

“You fall in love with songs as a kid – and you didn’t write those songs – [but] they make you remember something great or help you get over a heartache, or somehow in the way it was written, it pierces your soul and affects you,” he says. “That doesn’t go away, that still happens for me as a recording artist and if it happens with a song that’s been written by somebody in this town [and] it’s not getting cut, it’s a whole different opportunity. It’s that same old feeling just like, wow, you know? All those magic feelings about a song.”

Ballard co-wrote two on El Rio: the bombastic “LA Woman” and the smooth “Sweet Time.” “I always think the best song should win, and I think sometimes as a songwriter you can get in the way of that because you’re prideful [or] you’re not realistic about what you think you’ve written,” he says. “For example ‘Cigarette,’ I hadn’t written a song like that, that made me feel that way. The fans deserve that, by the way,” he continues. “They deserve the best songs that their respective recording artists can find and/or write.”

In all respects, you can’t accuse Ballard of not having style.

Physically, Ballard is a bit of a James Dean ringer: he’s strong cheekbones and leather jackets, and his music videos find him at the wheel of a classic car or a motorcycle. Onstage later that night, after a rocking Elvis cover – signature dance moves included – his coiffed hair comes out of place, to which he calmly presents a switchblade comb and adjusts it. But there’s no intimidating side to Ballard – he seems a keen listener and keener at self-reflection. Though he wears tortoise-shell sunglasses for the entirety of our conversation, the lenses are a transparent sepia, revealing his thoughtful blue eyes.

“I just felt I’ve always kind of romanticized the Wild West,” Ballard says. “It’s one of those things if I had a time machine I’d probably go back to try to meet like Wyatt Earp or something.” He laughs. “See what he was wearing.”

To record the album, he shares, Ballard skipped town. He arranged in Muscle Shoals and recorded in El Paso, spitting distance from the Mexican border, with the final two tracks taking shape in Los Angeles.

“We went down to Muscle Shoals and arranged because Bob Seger recorded a bunch of stuff there, and the Stones,” he says. “[You] start getting your head into that world and you start remembering the things you were thinking about when you were a kid in your bedroom playing to Stevie Ray Vaughn. You’re in that headspace and you’re not at home taking the trash out. As a creative person, I needed that.”

“It felt like a mission,” he continues. For those recording in Nashville, the process can stretch weeks.  The studio – and the accompanying desire to tweak – is only an ignition-turn away. For Ballard, the trek to Texas added a sense of urgency. “It felt like it elevated Marshall Altman, my producer, and me, elevated our hustle,” Ballard says. “‘Cause we were like, ‘We gotta go down there and get the treasure and bring it back.’ We wanna be riding that bus back to Nashville going, ‘We’ve got a great album.’ That was a little bit of pressure, but it made us rise to the occasion.”

That intensity is evident from the first notes of El Rio, from the bluesy swagger of “El Camino” to the rock-infused and punchy “Cigarette.” “LA Woman,” one of Ballard’s two co-writes, howls into the Hollywood night. “Wasting Time” is both dynamic and sure-footed, the sonic smile between the clink of cheers-ed beer bottles and the bubbling first sip.

“Going down to the Mexican border, it just, it excited my spirit,” Ballard says. He and his creative colleagues stayed at a hacienda right up against the Rio Grande, the river that serves as the album’s namesake.

“I’m not saying I wouldn’t want to record at the beach or something, but going down to the border, that’s cool,” he continues. His voice, gravelly to begin with, mellows to an awe-filled whisper. “It just inspired me, the studio inspired me, the desert was very inspirational. The desert comes alive at night, it’s like opposite. So that was really inspirational.”

He goes on, remembering the excitement surrounding the recording process. “Here I am, this is the best two weeks of my life so far,” he says, describing the old equipment, fresh songs, his crew with a studio all to themselves. “I felt so blessed and thankful in that moment,” he recalls, his voice returning to a near-whisper. “Then to think about the people over on the other side of the border … and the juxtaposition of being on the American side … It just made me really thankful, put me in a really thankful kind of headspace.”

“I always try to make to push myself to make the best music I can make that will become whatever it becomes and that’s all I will deserve,” Ballad says. “And there’s peace in that. I’m just trying to stay focused on always getting better. it’s the only job security you can have in the music business. if you wake up every day and go, ‘I’m getting better today,’ then it’s a good chance you’ll have a job tomorrow.