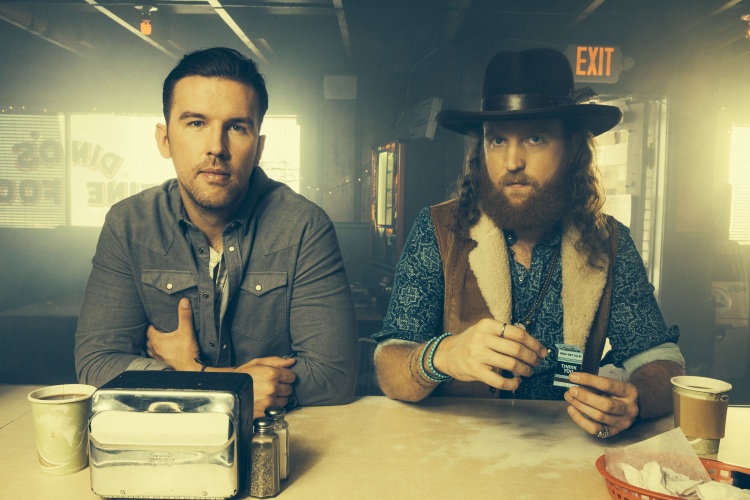 “Miranda Lambert crowds were really fun and super energetic,” Osborne says. “She has a really big female audience obviously, and I will say, from stage we are the spectators of the audience, we can watch what’s going down, we can see how people are interacting and we can see what’s working and what’s not working and if people are having fun or not having fun. I will say 9 times out of 10, girls show up and they immediately start having fun. It takes a few beers for the guys to let loose, but girls have always shown up to party, especially at country shows.”

Though they’ve been continuing to grow their fan base on tours like Lambert’s, as well as opening for acts including Darius Rucker, the duo will take the headlining slot this fall for their Dirt Rich Tour, bringing Lucie Silvas and LANco along as openers.

We’re really stoked to take out LANco,” Osborne says. “We’ve played a show with them before – we hung out all night, drank some beers – and we see ourselves in them, they remind us of who we are when we were in our early 20’s, just excited. They’re a great band and great dudes and we can’t wait to have ’em out.”

“The thing about Brothers Osborne,” he continues, “[is] we try to treat our experience on the road and our band and all the others like the full on family experience, you know? Even our fan club is called the family. It’s amazing having Lucie out, being my wife and also my brother’s sister in law, it’s going to be like having a huge family out. Lucie’s one of the best singers on the planet, and she definitely deserves to get in front of an audience so they can experience what she has to offer.”

Touring isn’t the first time the duo and Silvas have collaborated – Silvas and their sister Natalie Osborne provide vocals in a chant section in “21 Summer” and “Ain’t My Fault,” and John Osborne co-produced and played on Silvas’ most recent album, Letters To Ghosts. “We’ll do a lot of collaborating on the Dirt Rich Tour as well,” he says. “We haven’t put anything in stone but we’d love to have guests out with us and there’s no better guest to have out there than Lucie.”

Aside from touring, the duo recently released their video for “21 Summer,” which loosely channels the lyric of the song – young love, nostalgia, retrospection – but offers a twist in that the woman the protagonist falls for is a prostitute. “My brother and I just love being creative at any given moment,” Osborne says. “So when it comes time to write the treatment for something, we’re not gonna choose the easy route. [It] gives you an opportunity to challenge yourself and to challenge the listener and take them on another journey – not just the sonic journey but a visual journey.”

“21 Summer” isn’t the first time Brothers Osborne have gone above and beyond the lyric – the video for “Stay A Little Longer” was much-buzzed for its depiction of relationships not often found in country visuals. “With “Stay A Little Longer” we wanted there to be a much bigger message behind it,” Osborne says. “The sub-narrative to that video is that love is hard for everybody. I feel like a lot of times, especially in country music, they adhere to the same formula of early-to-late-20’s white guy ends up with early-to-late-20’s really hot white girl that looks like… these people hardly exist, these people are like beautiful, beautiful white man, and these beautiful white girls, and they either live happily ever after or they break up.”

“It’s such cliched bullshit,” he continues. “Why not say another message? And ours was yeah, there [are] white guys and white girls – love is hard for them – but it’s also hard for interracial couples, young couples, gay couples, old couples. It’s hard for everybody. And if there’s one thing that ties everyone together, it’s [that] love is difficult. We all have to go through the same trials and tribulations as the next person. No one is exempt from that. And sometimes love ties us together and sometimes hurt ties us together and those two things run very very close together.”

Love and hurt are themes that run deep in the duo’s debut album, Pawn Shop, released earlier this year. Throughout, and undercurrent of real life runs deep, spurred by the brothers’ Maryland roots. “When you listen to “Dirt Rich,” that’s how we grew up,” Osborne says. “We didn’t grow up with much money, but there’s a line in the chorus, ‘if it’s broke don’t fix it, learn to live with it and like it just the way it is,’ and that’s kind of how we grew up. We grew up in a very blue collar town, it was a tradesman town, and we did the best with what we had. The music is just a culmination of all of our influences we listened to when we were growing up.”

“I would venture to say 90% of what [TJ and I] listened to growing up was the same,” Osborne says. “In middle school I went through a very serious Seattle grunge phase where I wore plaid shirts and baggy denim jeans and was anti-everything ’cause I loved Nirvana and Pearl Jam and Soundgarden and Stone Temple Pilots. I still fucking love it, I mean, it’s incredible songwriting and incredible music, and everything about it. TJ liked it, but I don’t think he immersed himself in it as much as I did. But for the most part we listened to the same things. We listened to everything. Our dad had a massive CD book – I miss CD books, being able to flip through the pages and seeing the cover art of all the records – and it would range from everything, from like Bob Seger to Tom Petty to Squeeze to George Jones to Merle Haggard to Al, the Garth Brooks records, but then even like some pop music: Michael Jackson and Mariah Carey. Surprisingly our dad, who’s a big blue collar plumber, loves Mariah Carey.”

The duo sets out on their Dirt Rich Tour starting this month. Check out the dates below.