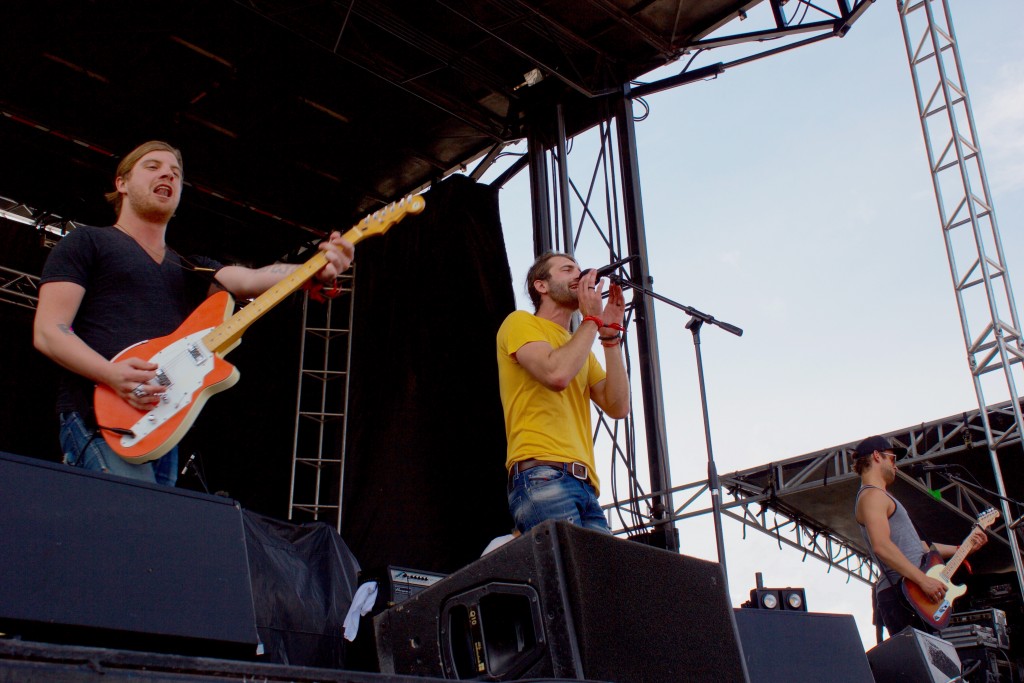 Ryan Hurd has been a staple of the country music festival circuit this summer. His set is a treat, thought if you’ve yet to see him live, you may be in for a bit of a surprise. Songs like “Lonely Tonight,” during which band-mate Joey Hyde rocks an impressive imitation of Ashley Monroe’s vocal, or “Payback,” recorded by Rascal Flatts, aren’t covers: Hurd wrote them.

“I’ve always just written and let everything kind of fall where it is,” Hurd says. Though the transition from writer to artist could, for some, complicate the process of going into the writing room and writing songs for themselves – or for other artists – Hurd’s process hasn’t much changed. “Some people are really good at writing for certain things and I’ve never been that guy,” he says of target writing. “I love poetry and I love Nashville and I just show up every day and try to do something that I kind of haven’t or just that I like. A lot of times artists want to cut the next thing, they don’t want to cut what they’ve already done, so I just try to do my next thing. Whether that’s something for me or for somebody else, that’s fine. Or nobody. Generally, it’s for nobody. You write a lot of songs that nobody ever hears.”

Fortunately, there are many of Hurd’s songs that listeners can hear, whether sung by Hurd himself or by artists including Tim McGraw, Darius Rucker, The Cadillac Three, The Swon Brothers, Jake Owen, or The Brothers Osborne. “I’ll Be The Moon,” which Dierks Bentley recently recorded as a duet with Maren Morris, was originally a Hurd song, a duet – also with Morris – that appeared on the physical copy of his EP Panorama. “It’s a lot more ethereal, a lot spacier than his; his is a lot more country than ours is,” Hurd says.

Stand in a crowd or turn on the radio and it’s clear that Hurd’s songs are beginning to click. However, his path to music was far from linear. Hurd played the piano as a kid – “I actually really liked it but I don’t like to practice and I don’t like to read music” – and was drawn to music, performing in a band in college while he earned his sociology degree. “I was going to go to graduate school for urban planning,” he says. This reporter makes a joke about the need for better urban planning in Nashville as the city grows; Hurd is quick to come to the city’s defense, citing a long amount of time to get anything done as handcuffing for the city’s development.

“I didn’t know what to do,” Hurd continues – though accepted to a few graduate programs, he’d balked at attending – “so I went and worked with my buddy in Montgomery, Alabama for eight months and he gave me a job driving a truck, working for his biodiesel company. I was like, I don’t want to do this either,” he laughs, “[so I] came back to Nashville, started writing songs with Aaron [Eshuis], Joey [Hyde], and Matt [McGinn].” He and McGinn got their first cut together, a Steve Moakler co-write recorded by Jake Owen.

“At the end of last year I wanted to make a record,” Hurd says. He and Eshuis had grown up together in Kalamazoo, Michigan, and had been writing together for a long time. “We both just kind of thought about making a five song record – we just said, we’re going to do this for me, we’re gonna do the five songs that if I died tomorrow, they kind of represent what I do as a writer. It was really fun – we kind of took it one step at a time and every single step was really affirming. We sold out a release show at the Basement East” – the show was in fact the first ticketed sell out for the venue – “we just kind of chased it down.” Hurd’s team grew to include management and booking, bringing him to stages across the country this summer. “It’s a privilege to make music in Nashville, Tennessee, whether you’re writing or performing,” he says. “I just really have enjoyed putting my own voice to stuff and focusing on creating music and not really worrying about what other people want to hear or would like to cut, it’s just not to be like, I like that, I’m gonna go record it. We’ve been back in the studio cutting a record. It’s so much fun, so much different and cool. The more I do it, the more I think about it and love it.”

Catch Ryan Hurd live on the road this summer, and listen to his EP Panorama below.