Just A Hunch: Artists and Writers Building Buzz in 2015

Sometimes it’s easy to tell who’s being primed for stardom. The label calls in top-notch studio musicians for an EP, radio tours get longer, and summer festival lineups feature the artist in larger type. Sometimes, the buzz is undeniable; Sam Hunt, for instance, seems like he can’t blow up fast enough. But then there are the artists that only have a single, the openers with nothing recorded that absolutely blow their audience away, or the writers that are quietly penning the next “The House That Built Me.” Here are our picks for some of the hidden talents that are quietly but consistently earning our 2015 love.

Texas-based Waterloo Revival may at first seem like a ringer for more of the male-dominated mid-tempo music that’s uninteresting yet successful at radio. However, debut single “Hit The Road” is catchy (and Sirius XM The Highway approved!), vocally expressive, and melodically gripping, managing to achieve those coveted “feel-good vibes” without being completely generic. The group just signed to Big Machine, further promising a bright future.

Even though the duo has yet to release music, there’s a gigantic buzz around these two power-females, whose backgrounds include singing backup for John Legend and Fantasia. They’ve been wow-ing crowds in and out of Nashville, and were described by Rolling Stone last year as “The Band Perry raised on Aretha Franklin.”

It’s been two years since Angelucci released her debut EP Like It Or Not, but if you were to take that as an indicator that her fan base has moved on, you’d be wrong. The Boston native re-captures the hearts of her hometown with each visit, performing at a writers’ round and singing the national anthem for the Boston Celtics and the New England Patriots this winter. Her sophomore EP is due in the coming month, and promises a nuanced look at life’s complications, full of pop-country sensibilities and grounded with soul. 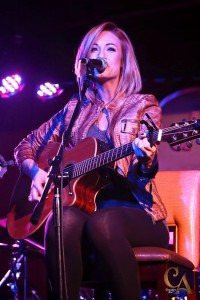 Jacqueline isn’t exactly new to the spotlight (at age 9 she starred in a Broadway production alongside Kenny Rogers), but her days as a solo artist are just beginning. Aside from a Christmas tune, Jacqueline’s current release is the delicately beautiful “Overdue,” which features vocals from Vince Gill (also check out one of her demos on our 2014 Compilation Tape).

The size of LuQuire’s stages got significantly larger at the end of 2014, as Lady Antebellum added backup singers to their live shows for the first time ever and tapped LuQuire’s immense talent for the job (but we’re going to go ahead and put in writing right now that we found her first.) LuQuire achieves pop, guts, and soul all at once, her strength as a contender matching that of her vocals.

Mentioning Hummon feels almost like cheating given the strength of his pedigree. Levi is the son of acclaimed artist and songwriter Marcus Hummon, and has been working closely with Shane McAnally, arguably one of the hottest songwriters in Nashville, who has been writing with and producing Hummon. However, that’s in no way to detract from his talent, which manifests in driving rhythms and pretty vocals for 2013 song “Make It Love.”

If I’m being honest, I’m typically skeptical of people who gain recognition through talent competitions; I mistrust their artistry over performance skill, and I doubt whether they’ve had the necessary history of playing late nights to empty rooms. But Thomas is the real deal in all respects: his performances are seasoned, his writing is thoughtful, and his artistry shines, with the stars aligning for what will prove to be a bright year.

The biggest thing Dylan Scott has going against him is the fact that he’s signed to Curb records, a label that doesn’t exactly boast a sterling track record as of late. What he does have however, is a fantastic voice. This guy is seriously the most talented new vocalist on the country music scene since Brett Eldredge debuted back in 2010. He can take an average-to-sub par lyric such as his debut single “Makin’ This Boy Go Crazy”, and turn it into something enjoyable. With the right material and the right promotion, Scott could prove to be a force in the industry.

Look, another Curb records artist! I won’t go any more in depth on that situation, but it’s hard to ignore. Talent and material is clearly not the issue for this duo, as they’ve proven, with efforts like “Love Is War” and “Wasn’t Gonna Drink Tonight”, that they can produce top quality music. Radio NEEDS to catch on, or American Young may risk being ignored by the masses.

Two Story Road
This husband and wife duo, composed of Jamelle and Brandon Fraley, has an upbeat vibe shines that shines through in their demos and on-stage banter.  Jamelle has an incredible range, and blends beautifully with Brandon’s smooth vocals. They are slated to release new music in the spring, produced by Mark Bright (Rascal Flatts, Carrie Underwood), but in the meantime their website is full of demos that showcase their potential.

Daisy Mallory
Mallory has opened for a slew of big country names, and was featured by Thompson Square as a voice worth hearing. Piercingly emotive, Mallory’s writing and vocals are strong, and we’re looking forward to hearing more from the Arizona native.
Kingston
Though you may have been familiar with them as the Carter Twins during their stint with CMT, the brothers have continued to impress musically, and recently landed Casey James’ single “Fall Apart,” co-written with hunch writer Will Bowen, which ended the year at #22 on Sirius XM The Highway. The duo are continuing to write and tour and look to have a promising 2015.
Adam Doleac
Doleac’s vocals are soulfully expressive (think Craig Morgan), paired with catchy hooks that feel right at home with the pop-infused winners at radio.

Jordan Davis
Songwriting runs in Davis’ blood, and though he’s yet to chart anything, his brand of emotive songs reflects a Jeremy Spillman or Casey Beathard – “I Wanna Be That Song” has serious Chris Stapleton vibes – and would be a beautiful addition to the repertoires of artists from Wade Bowen to Eric Church.

Hearing her music on the radio is nothing new for Dodson, who met with success in the pop sphere with her band Saving Jane. But pop is far from her only strength, as Dodson proved with her Rivers Rutherford / Bobby Hamrick co-write, Canadian artist Kira Isabella single “Quarterback,” which Spin named it’s #1 country song of 2014.

Though Brantley’s vibe as an artist favors rock over country, his writing in the country sphere is top notch. Brantley co-penned David Nail’s masterpiece “Half Mile Hill” with Tia Sillers and Mark Selby, and continues to wow us with emotive works like his worktape, “400 Horses.”

Lance Carpenter
Carpenter’s writing has some impressive pop sensibilities, which makes him a perfect fit for artists like our hunch mention Krista Angelucci, whose EP features his writing, and Kelesa Ballerini, who just took Carpenter to the airwaves with her single “Love Me Like You Mean It.”
Adam James
Not only is Adam James a killer songwriter under his given name, he wields a cowboy-hat-topped-with-dead-snake-wearing alter ego called Ft. Worth Ferguson, who sings swagger-heavy bro-country songs. Gems such as “Put Your Miller Where Your Mouth Is” and “Lasso Dat Asso” manage to simultaneously parody a genre and musically fit in perfectly, which puts the listener in the awkward position of joining James in disparaging a ridiculous trend with songs that they’ll have on repeat for being catchy as hell.
Brad Tursi
Though Brad Tursi’s current day job is as a member of rising group Old Dominion, he continues to earn his stripes as a seasoned writer. His credits include recent Kenny Chesney and Swon Brothers cuts, as well as Tyler Farr’s latest single, “A Guy Walks Into A Bar.”

Bowen closed out 2014 with his Kingston co-write “Fall Apart,” recorded by Casey James, at #22 on Sirius XM The Highway, often the tastemaking gateway to terrestrial radio success. Bowen’s writing is characterized by depth of emotion and attention to detail, with rock-toned vibes over Tom Douglas or Scooter Carusoe sensibilities.

Matt McGinn
Though McGinn’s already scored cuts with Jake Owen and Joey Hyde, we think this is just the beginning for the writer, who is signed to hit-maker Shane McAnally’s publishing company Smack Songs and whose frequent co-writers include Hyde and Ryan Hurd.