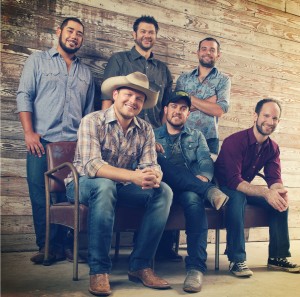 Time for quality R&R is a rarity as we enter the final stretch of 2014, and, as catchy as they are, “Jingle Bell Rock” and Mariah’s “All I want for Christmas,” certainly aren’t very conducive for escaping that frantic end of year feeling.  Although it was released back in early September, Josh Abbott Band’s EP, Tuesday Night, offers the perfect musical recipe to get you into the ‘kick back’ spirit and grant you a temporary escape from the end of year madness.

The 5-song EP was the band’s first release as a signee under Warner Music Nashville’s Atlantic Records.  Even with the move to a Nashville-based label, Tuesday Night shows strong evidence of their Texas roots, as the EP has less pop-influence than many of the songs coming out of Music City.  The banjo and fiddle plays a prominent role throughout the EP and the work lends itself nicely to a two step or half-step dancing routine.  Josh Abbott’s unmistakably Texas twang complements the EP’s light production and traditional instrumentation, contributing to the work’s laid-back spirit.

Lyrically,the EP shines in its ability to uniquely capture the joy inherent in simple, everyday moments.  This is best illustrated in title track “Tuesday Night,” which draws on the typical notion of seeking comfort after a long day.  “Every once in a while you need something to make you feel alright / Sometimes it’s just beer and tacos on a Tuesday night,” sings Abbott. While many country songs reference grabbing a beer with friends, you’d be hard pressed to find a song that mentions tacos, which gives the song a fun spin on an otherwise cliche topic.

The band’s current single, “Hangin’ Around”, a Josh Abbott, Josh Osborne, and Shane McAnally co-write, continues the theme of simplicity in saying that the recipe to a good time is great company.  The hook has a repetitive bounce to it that’s memorable without being irritating.  This quality, combined with the track’s slightly stronger rock influence, in comparison to the the other tunes on the EP, positions “Hangin’ Around” to perform well as JAB amps up their national promotions.

Blush offers a sweet contrast to the other tracks in that it taps into the band’s romantic side, with lines like ““so charming and rosy baby you embody life and grace.”  JAB strategically included for the purpose of helping facilitate a smooth transition to a new label and producer.  When we sat down with the band back in November, Josh explained that, “A lot of fans have told us that “Blush” is their favorite song on the EP, which is exactly why we put it on there.  It’s a very Josh Abbott Band song, and something that would have been on our first two albums.”

The Josh Abbott Band’s ability to maintain their Texas Country sound, and stay true to the college spirit upon which they were sets the band apart in the commercial sphere, where genre lines continue to be blurred challenging country’s more traditional values