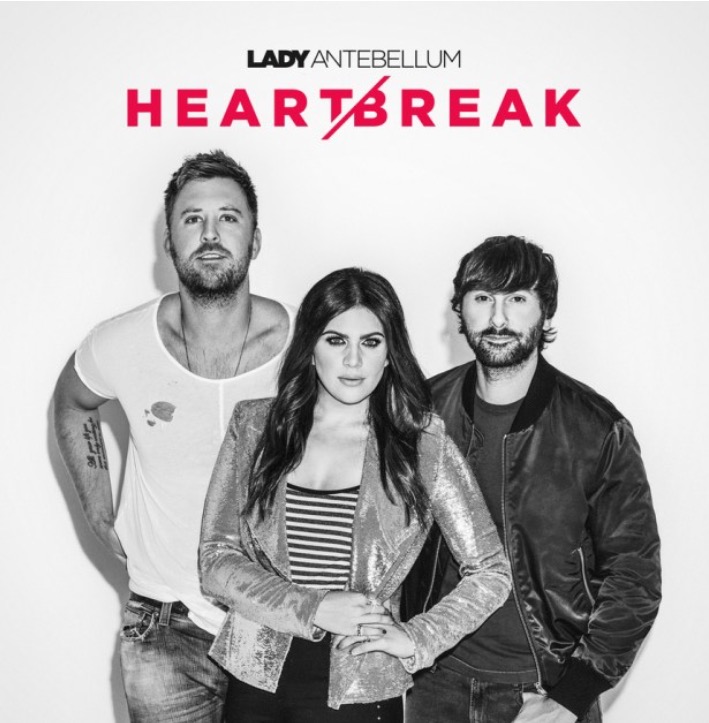 After taking an extended break to spend time with family and work on solo projects, Lady Antebellum has released their much-anticipated sixth studio album Heart Break. The project was produced by busbee and released via Capital Records Nashville. However, the trio did not completely step away from music during their hiatus.  During the group’s break Charles Kelley released his first solo album The Driver,  Hillary Scott (along with her family) released a Grammy-nominated gospel album Love Remains, and Dave Haywood produced country trio Post Monroe’s debut EP.

While working on Heart Break, the group decided to step away from Nashville and spend time together, getting back to their roots. The band spent time in both Florida and Southern California together rediscovering what their music was all about. The clip below lends insight into the production of Heart Break:

The trio co-wrote all but two tracks on their latest album, along with the help of some of Nashville’s best-known songwriters including Shane McAnally, Eric Paslay, Hillary Lindsey, Jesse Frasure, Maren Morris, Ryan Hurd, Nicolle Galyon and more. The first single released off the project, “You Look Good,” has a funky, high-energy sound and accompanying impressive horn section which provided the fans with a taste of what was to come. “Heart Break”, “Somebody Else’s Heart”, “This City” and “Hurt” were all released prior to the June 9th album launch. Each single touched on a separate emotional topic, ranging from cutting loose and having a good time to the effects of a breakup.

“Good Time To Be Alive” is an anthemic, high-spirited, foot stomping tune with very catchy lyrics that is sure to be a favorite sing-along. The song has a positive message about making the most of every day: “So much we can’t control / Too much to worry bout’ / Got everything that we need, right here, right now / Yeah, it’s a good, good, good time to be alive / This world could throw me anything with you by my side / It’s a crazy, perfect, messed up, beautiful ride, yeah it’s a good, good, good to be alive.”

“Teenage Heart” is another uptempo track with a catchy chorus focusing on the freedom and passion that comes with young love. “Big Love In a Small Town” has you reminiscing about past love and thinking about what might have been:“We were thunderbirds and Pontiac wild / Flying in your front seat at least for a little while / Baby, tell me do you ever feel like our love was drowned out by real life? / Well, I’ve been reminiscing ’bout you and I, you and I, oh you and I.”

“Think About You” is a different kind of love song – the kind about being over him/her. It’s well written and focuses on moving forward from a relationship, no longer being held back by the memories tied to places or things. Scott takes lead vocals, singing: The place where I first saw your face and you bought me a drink / And where we talked till 2 a.m. about every single dream / Well now it’s just a bar and a beat up parking lot, I see / Yeah, that’s all it is to me.”

The fact that they co-wrote most of the tracks on the album lends authenticity to the deeply personal project. “Army” was written with the band members’ spouses in mind, a metaphor for their strength and resilience.“On the front line, she’s a statue, a safe place to run to / The strength I need to get through every day.” “Home” is about the safety and security found in a loving relationship that’s built over time: “Day by day and brick by brick we’re building something real and something strong.”

“The Stars” touches again on being strong and knowing who you are, a reminder that you can get through anything: “Your eyes got a fire that can burn the cold away and your smile could turn the darkest night into a summer day / Sometimes you’re gonna feel like you just can’t lose, sometimes you reaching for the reset / But whatever comes your way, no matter what you’re going through, don’t you ever forget / The stars ain’t got nothing on you.”

Heart Break closes with a reality check in “Famous”. The song was inspired by the life and tragic death of singer Amy Winehouse, and touches on the reality of becoming famous and the downfalls that often come from too much too fast. Dave Haywood tells People Country: “This is an interesting departure for us, it’s a really heavy song but we felt it was important to include because it closes out the record and makes you think.”

Lady A’s signature harmonies and beautiful melodies are present throughout the album, and the subject matter is thoughtful and relatable. Heart Break is an album that should truly move their fans. Have no fear – Lady Antebellum is back and better than ever.

Lady Antebellum kicked off their “You Look Good” World Tour last month, with Kelsea Ballerini and Brett Young as their opening acts. For upcoming tour dates visit their website.

Previous Post: If You Like Rihanna’s “Love On The Brain,” You’ll Love These Five Country Songs
Next Post: Jason Isbell & The 400 Unit Pose Questions, Provide Answers on ‘The Nashville Sound’