Might We Have a Trend? Maggie Rose Releases “Girl In Your Truck Song” 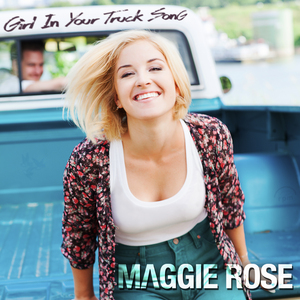 Single: “Girl In Your Truck Song”

Last week we shared our love for Maggie Rose’s debut album Cut to Impress, but we were not at all ready for this. This morning, Rose debuted “Girl In Your Truck Song,” the lead single from her upcoming sophomore album on The Bobby Bones Show. Rose’s first album offered a unique twist on the country/blues genre with some really well-written tracks on a variety of topics. This is quite the departure.

While country’s sassy new duo Maddie & Tae have already claimed they DON’T want to be the “Girl In A Country Song,” Rose is taking a different approach to the bro-country phenomenon. The single, written by an all-star team of Caitlyn Smith, Gordie Sampson, and Troy Verges, is about wanting to BE that stereotypical girl in the bro-country songs that are dominating airwaves. With lyrical references to some of the genre’s biggest hits: “Chillin’ out with a cold beer, hanging with the boys ’round here / Gonna take a little ride, that’s my kind of night / You and me, getting our shine on.” Rose is definitely pandering to the masses with this one.

We don’t mean “pandering” in any negative sense. Miranda & Carrie’s “Somethin’ Bad” has a generic rock-leaning edge to it – making it stick out like a sore thumb in Lambert’s discography, but it’s helped her get the highest peaking track of her career thus far. “Girl In Your Truck Song” has a strong melody, which is elevated by Rose’s fantastic vocals and sounds as lovely as ever. It seems more a strategic move than anything on Rose’s part – get in with radio listeners and then follow it up with heavy-hitting material on the album and following singles.

Buy “Girl In Your Truck Song” now available on iTunes.