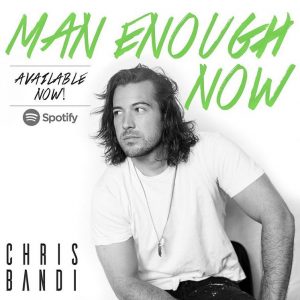 Filled with raw emotion and a “shoulda-woulda-coulda” mentality, Chris Bandi’s first single “Man Enough Now” will punch you right in the gut then you will find yourself listening 10 more times. We first discovered Bandi during his opening set for Canaan Smith last November and were blown away by his charisma and energy on stage.

For the ladies, “Man Enough Now” rings true, with a man coming back after some time apart, realizing his errors and asking for a second chance. For the men, even if you don’t want to admit it you’ve probably felt this way at one point or another, and if you haven’t yet, you will.

“We all make mistakes but growing up means learning from every single one and being man enough to admit when you make one,” says Bandi of the song, which he wrote with songwriters Jason Massey and Jason Duke and which was produced by Massey (Kelsea Ballerini). “The idea just kinda came to me,” Bandi continues.  “I was thinking about a relationship I had had in the past and just thought, if we dated right now would I have made the same stupid choices? I really don’t think so.”

Take a listen to “Man Enough Now” below: