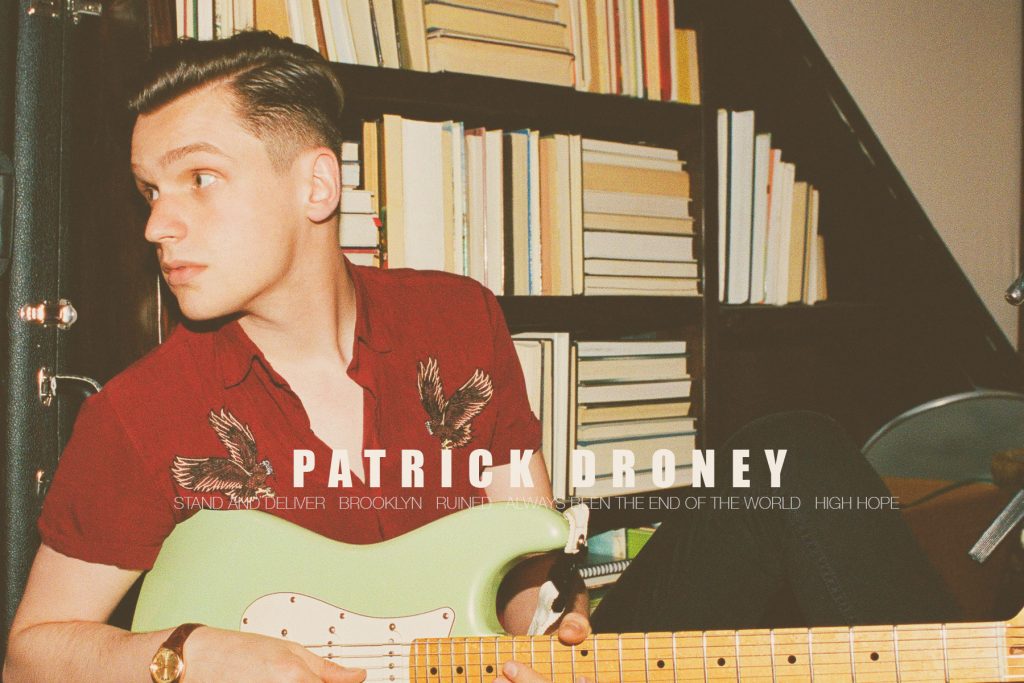 Patrick Droney’s debut project – a self-titled EP just five songs long – is a master class in introductions. It’s brief, but well-rounded and jam-packed, bursting at the seams with artistry and confidence and talent. The project was produced almost entirely by Droney and Ian Fitchuk (Kacey Musgraves, Maren Morris, James Bay), and the tracks are nearly as diverse as they are cohesive. There’s hurricane-force guitar, skillfully aimed toward all your weakest points, and vocal delivery that shoots so straight you’d be crazy to doubt his authenticity.

Lead single “Stand and Deliver,” written with Better Than Ezra frontman Kevin Griffin, creates a welcome surplus of reassurance – a sonic pep talk about loyalty and strength that’s yours for the taking, whenever it’s needed: “It comes to pass / Don’t come to stay … You won’t drown in the river, I’ll swim out to you / I’ll stand and deliver, I’ll carry you through.” Similar sentiments radiate from “Always Been the End of the World,” a fists-in-the-air anthem that combats fear and uncertainty with bold drums and a strong dose of perspective.

“Brooklyn,” a catchy pop-leaning track and an undeniable standout, finds Droney flexing his storytelling muscles as he illustrates a cityscape backdrop on which to lay his emotions. The once-ordinary moments he details – “Slept like a rock between subway stops with your head on my shoulder, babe” – have become monumental in hindsight, and so he airs out his heartbreak atop a delicate chorus, its devastating mantra (“Baby, we don’t talk anymore“) bolstered by layers of falsetto.

The EP’s guitar highlights are found on the slower jams, “Ruined” and “High Hope,” both of which showcase the skills Droney was known for long before this EP existed. (As a teen, he toured with the likes of B.B. King and Elvis Costello, and he’s been an artist ambassador for Fender for the last several years.)

“Ruined” is the bluesiest of the bunch, a smoldering depiction of romantic surrender that leaves both its narrator and listener defenseless. Written with Fitchuk and Sarah Buxton, it features some of the project’s best lyrical punches and offers striking originality where tired cliches could have fit the bill. “High Hope,” too, boasts lyrical highlights – “Wonder if you’re seeing colors yet / Or if your spirit needs a tourniquet / ‘Cause if it does I can hold you tight enough…” – and its spacious production serves as a refreshing contrast to the other higher-voltage tracks.

Droney delivers a strong set of modern classics, and the EP wholly celebrates organicism over artificiality and puts longevity before trendiness. It’s a stellar first taste of what’s sure to be an epic career.

Find more information and upcoming show dates here, and listen via Spotify below: