Sarah Miles Is Ready for Nashville to ‘Hear Her Out’ 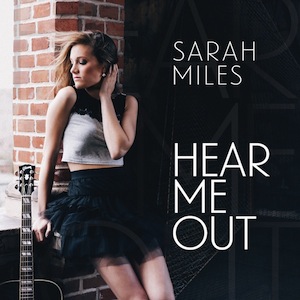 New York based singer/songwriter, Sarah Miles, is making a name for herself with her recently released EP, appropriately entitled ‘Hear Me Out.’  Citing such influences as Sara Bareilles, Ingrid Michaelson, James Taylor, and Joni Mitchell, it is safe to say that with her multi-genre sound, Miles is bringing a fresh prospective to the country genre.  Gearing up for her debut at Nashville’s esteemed Bluebird Café on August 17th, I had the opportunity to speak with her before she dives into the Nashville scene.

As an independent artist, Miles has won songwriting awards, had her song “Something About You” appear on NBC’s The Voice, and has even become a YouTube sensation, notably, with almost 65,000 views on a video cover of Avicii’s “Wake Me Up.”  With such a great response, she even released it on iTunes.  After a chance meeting with a photographer/videographer in New York City, Miles began posting videos of her performing cover songs, hoping someone would find their way to her original music.  “When I noticed that more and more people were putting out these videos on YouTube, I thought it would be a great way to reach out to people.”

While building her catalog, over the past year she has written at least a song per week.  A destined co-write with songwriter/producer Brain T. Murphy prompted the musical team to record the songs they had been working on, which eventually evolved into her album.  On working with Murphy, Miles said, “We just clicked really well and we were doing some awesome songs together.  He is actually more of a producer than a songwriter, so once we had a couple of songs, I was like ‘why don’t we actually record these.’”  The social media engagement of Miles’ career prompted her to use a Kickstarter campaign to fund the project.  Miles continued to describe the recording process as “super organic,” having recorded the entire EP in Murphy’s Brooklyn apartment.

Although all five tracks on ‘Hear Me Out’ are country infused, the one that particularly stands out is “Rigid Frame.”  With such honest lyrics, Miles crafted a heartbreaking picture of a withering relationship against a memorable, hopeful melody. “We can find a solid ground, force a smile and then see the sun rise up again, this I know.”  When asked what inspired the song, she said, “It ended up being one of these songs that kind of poured out of me and I wrote it in like 30 minutes.”

When looking at her touring history, Miles has shared the stage with a range of artists, including such names as Tyler Hilton, Teddy Geiger, Tony Lucca, and even Sister Hazel. She cites touring with Teddy Geiger as “definitely a highlight.”  As an opening act to Sister Hazel, in front of a sold-out Florida crowd, Miles remembers that moment as one of her “most amazing experiences.”

If you’re in the Nashville area, be sure to check out Sarah Miles at The Bluebird Café this Sunday, August 17th at 7:30PM CST.  After her Nashville performance, Miles will head back to New York City for her full-band EP Release Party at The Bitter End on September 6th, followed by college shows on the East Coast.  We love ‘Hear Me Out,’ and after one listen, we know you will too.

‘Hear Me Out’ is now available on iTunes.