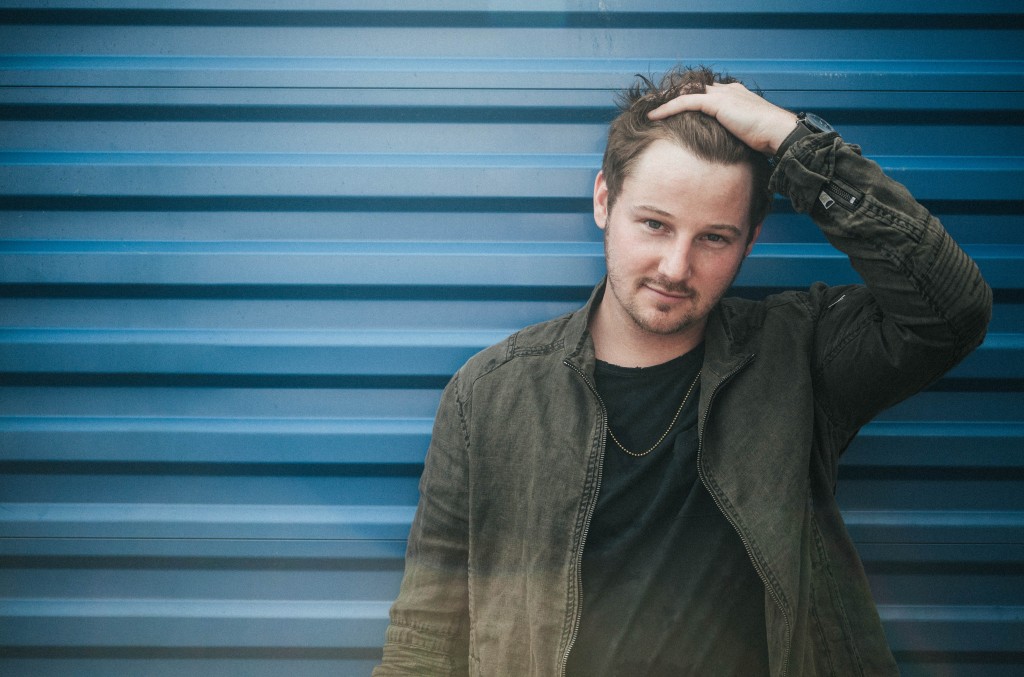 Even if you’ve yet to see sand this summer, chances are you’ve sung along to “Somewhere On A Beach,” Dierks Bentley’s latest single, a recent two-week number one. And when you do make it to the water’s edge this year and kick off your shoes and work worries, the hook will probably across your mind.

“We wrote it last summer, me, Jaron Boyer, and Michael Tyler,” co-writer Josh Mirenda says. “My in-laws have a condo down in Destin [Florida] that’s like a second home. So we took a writing retreat, and we’re sitting at my favorite little dive spot and the sun’s going down and we’re eating and we just keep seeing all these people. I don’t know who said it, but one of us was like, ‘Man, if I ever go missing, y’all can find me somewhere on a beach.’ And we all kind of looked at each other and we were like, ‘That might be a cool title.’ So we wrote it down.”

It was an idea that became Mirenda’s first cut, single, #1, and tour name.

Though the trio began writing it on that trip to Destin, it just wasn’t clicking right, so they moved onto other songs – one become a cut for Michael Tyler, the other was recorded by Jason Aldean for his upcoming record. Back in Nashville, other wheels were turning. In a write one day with pop producer Alex Palmer, the force behind songs for Iggy Azalea and Chris Brown decided to play them a riff he’d been working on, a groovy electric riff that smoldered. “He plays it, and we all kind of look at each other, and [Michael Tyler] was like, ‘Somewhere On A Beach,’ man, this is it,” Mirenda says.

To have your first song recorded by an artist be a single, let alone hit #1 on radio and Billboard charts or inspire the name of a national tour, is rare. “I don’t think it’s hit me yet,” he says. As we speak, the song is #1 on the Billboard charts – a few short weeks later, it would top Mediabase as the top song on radio, where it would sit for two weeks straight. “It’s crazy.”

Crazy too is the journey that led him to his publishing deal with Brett James’ Cornman Music. “I always wanted to do music ever since I was in high school,” the Tennessee native says. “I went to Belmont and everybody was way better than me so I was like, ‘I don’t know if this is going to pay bills.'” Mirenda opted instead for a not-so-conventional backup plan: pre-med, pre-law. “I was going to do oral and maxillofacial surgery,” Mirenda says. “I was a surgical assistant for four years. All through college, every summer and christmas break I was in the OR from like 6 a.m. until 6 p.m.”

“I just started writing songs to get away from American political institutions for law school and organic chemistry for med stuff,” he continues. “I entered the showcase stuff at Belmont just for fun, cause you don’t have to be a music student.” A professor named Dan Keen approached Mirenda after one and asked to meet; with his encouragement, Mirenda began writing more, playing out at songwriter rounds, and meeting with publishing companies, including Cornman.

Even so, songwriting wasn’t a sure thing. Upon graduation, Mirenda gave himself six months of pursuing songwriting full time; if nothing connected, he’d go to dental school. “I pretty much treated writing like it was my job for six months after graduation,” he says. “I was sitting at Burger Republic in The Gulch at lunch six months to the day [after] I graduated and Brett [James] called and he was like ‘Hey, I need to have your lawyer’s information, we’re putting in a deal offer.'” I was like, ‘Sweet baby Jesus, I’m not going to dental school, I’m going to be a songwriter.”

When Mirenda isn’t songwriting, he’s observing. “I went out with Dustin Lynch back in November to write and I would go out in the crowd and just watch people,” he says. What are they doing; at what point does the crowd have their drinks up and they’re all partying, everybody’s dancing, and is there a point in the set where they’re going to the bathroom or they’re looking at a phone or going to get a drink. You can notice a trend, like when a bulk of people are doing [something like that.]”

“I wanna write songs for the people that are spending hard earned dollars at the concert and I’ve noticed that they don’t go get more drinks when a party song’s on.”

It’s a mentality that’s brought Mirenda immense success with Bentley, as well as with two upcoming songs recorded by Jason Aldean. Mirenda’s strength is melodies, but he’s also constantly seeking ideas, whether it’s something as simple as a phrase during dinner at sunset or something perhaps unexpected, like a word on a Justin Bieber or Katy Perry record that sparks a country concept. “It’s all just relating to culture,” Mirenda says of writing and how it relates to genre. “Some genres are with Maseratis and Maybach music. I want a Rocky Ridge truck.”

Unlike many songwriters, Mirenda feels comfortable target-writing, or writing with a specific artist in mind. “Instead of hitting a bullseye, I’ll try to hit the second ring out,” he says; if an artist for whom it might be a perfect fit isn’t going to record it, it has a better chance of landing with someone else. “I try to make my voice kind of like a chameleon when I sing … if I’m pitching Aldean, I’ll sing more like Aldean,” he says. “Just to enough where they’re like, ‘I could hear myself singing on this.'”

They can – and do. If the massive success of “Beach” is any indication, country lovers can hear themselves singing along.