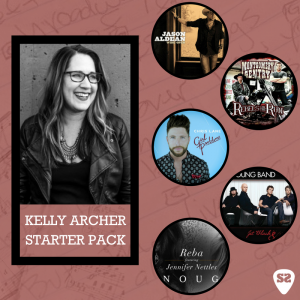 Songwriter Kelly Archer just recently had her first #1 with Brett Young’s “Sleep Without You,” though she’s a veteran to Music Row. Her first single happened pretty quickly after she got her first publishing deal, with Aaron Tippin’s “It’s Friday” in the early 2000s.

“I found out early on that perception is not reality,” Archer says. “After about 8 weeks, if I remember correctly, he and his label parted ways and we said goodbye to our single in the 50’s somewhere on the chart. Ouch.”

Since then, things have gone quite well for Archer. If you’ve turned on the radio in the past year, you’ve probably heard Young’s “Sleep Without You,” which reached the top of the country radio charts in the fall of 2016. Co-written with Justin Ebach and Young himself, the tune marks Archer’s first #1. The song’s catchy lyrics provide a perfect template for Young’s R&B influence to shine. She mentions all the pieces fell into place pretty easily when the three sat down together.

“My good friend Ronna’s company ShoBizRo was working with Brett as an independent publisher. She mentioned him a couple of times to me and set up a day to write. Brett walks in, this tall, handsome drink of water and I immediately noticed that this guy knew what he wanted to say,” she says of the session. “He was an unapologetic romantic and had a very clear point of view. He told a story about his parents being married for so long that his dad had a hard time sleeping when his mom was out of town. We ended up writing this fairly quickly and recording it that day. I mentioned to the fellas that I may or may not have danced around in my living room several times to this demo. There was just something special about it.”

The recipient of AIMP’s Rising Independent Songwriter of the Year award in 2017, Archer is originally from western Canada – after she moved to town she would actually travel back to Vancouver for periods of time while she sorted out working in the US.

“I started driving from Vancouver in January of 2001,” she says. “I knew no one in Nashville, I had no cell phone and 2,700 miles ahead of me. I couldn’t work in the U.S. being Canadian so I would just wander around for about eight weeks until my money ran out and then I’d drive 2,700 miles back and go back to several part time jobs I had. I did the drive seven times (one way) in my first 18 months until I got my first publishing deal at the end of 2002. The drives were long and I hope to never do it again, but I also think the struggle made me work harder and has made the journey very satisfying.”

Now, Archer has Justin Moore’s “Somebody Else Will,” a co-write with Adam Hambrick and Tebey Ottoh, climbing the charts. One of the best sub-categories of country music songs are the ones where a guy walks into a bar and sees a girl he can’t live without. Perhaps it exists in other genres, but country music just does it better.

“Adam Hambrick brought in the title and had a different approach in mind at first,” she says. “I mentioned there could maybe be a different approach and kinda mumbled something off the top of my head. We immediately shifted gears and Adam, Tebey and I just started to run with the sexier, fun side of the idea. That song was something we all loved but it really came alive the day we demoed it. Nashville has amazing session players and the crew we had that day just really knew how to capture the vibe we were going for. I think we got chills as soon as they stated playing it. Justin Moore did a great job making it his own.”

Here are a few reasons why you should check out some of the other songs we love from Archer’s back catalog:

Jason Aldean – “On My Highway”

A cut from Aldean’s 2009’s Wide Open, this ballad finds Aldean examining his introspective side, looking back at past experiences and pondering what he’s learned from the good and the bad alike. It’s a different side of Aldean than what’s normally released as a single from him, and it’s a nice change.

Favorite lyric: But what a feeling, chasing the sun // Living my life like a shot from a gun

A tried-and-true heartbreak song, where a day can go from pretty awful, thanks to a loved one leaving, to extra awful after spending time pondering the relationship they left behind. If you’re familiar with any of Montgomery Gentry’s early ballads, you’ll appreciate this cut from 2011’s Rebels on the Run.

“I think we both just like to get the best song in the room that day,” Archer says of working with Weaver, a regular writing partner for her. “That’s why we don’t seem to get sick of each other, we don’t force anything. If we don’t get a song we don’t fret, but we usually do. Justin and I are a good team with artists as well, I think because we aren’t artist but we both sing so there’s no ego, but a lot of understanding.”

Favorite lyrics: But baby every now and then // I let the heartache win

It’s not clear from the context of the lyrics whether the story Chris Lane is portraying in “For Her” is that of a long-standing relationship or one that’s just recently been solidified. I suppose it doesn’t really matter, but I can’t help but think of that moment in a relationship that’s not-quite-old where a person decides they really care about someone and can’t stop shouting their devotion from any available rooftop. It’s the best feeling.

Favorite lyric: She make you wanna fall // Make you want it all

A deep cut from Eli Young Band’s 2008 release, Jet Black and Jealous, the somber track finds Archer teaming up with Justin Weaver once again. If you’ve ever left home in search of what else the world has to offer, you’ll appreciate this one.

Favorite lyric: So I’ll shake some hands // Chase that calling star // I’m gonna drive so fast // I can only drive so far

This is word play at its finest, with Jennifer Nettles making an appearance on the track, too. Reba’s trademark vocals tell a familiar tale of being caught on that middle ground – when a partner doesn’t seem quite interested in being another half anymore, but also doesn’t seem to be going anywhere, either.

”We were writing for a placement in the ABC  show Nashville for a duet between the two lead females,” Archer says of the song. “Our co-writer Aaron Scherz had the idea, with the double meaning and most of the chorus when we came in that day.”

“The way I write has a 90’s country, sometimes 80’s rock structure to it. I just love the story telling aspect. While [we] were laying the vocals down, which included a dramatic key change we said, ‘If they don’t cut this, the only other person who could do this justice is Reba.’”

“Flash forward over two years, Emily’s song plugger plays this for Reba one day and she cuts it the very next day; that never happens!”

Previous Post: Alex Williams’ “Little Too Stoned” Is Rooted In Tradition
Next Post: Demo of the Week: “Hood of My Heart” (Brett Sheroky, Casey Smalley)