“Sun Daze”: How Florida Georgia Line Take the Holy Day in Vain and Why Nobody Seems to Mind 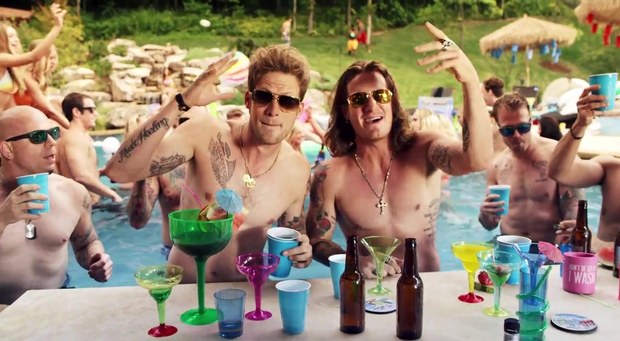 “All I wanna do today is wear my favorite shades and get stoned
Work a little less, play a little more
That’s what this day is for
And all I wanna do is lace my J’s and lace some Jack in my Coke
Work on my laid back, ain’t nothin’ wrong
With gettin’ my sun daze on”

So goes the chorus for Florida Georgia Line’s latest single “Sun Daze,” currently #8 on Hot Country and #12 on Country Airplay, which has sold 200,000 units to date according to Nielsen Soundscan. It’s a fun, upbeat tune that salaciously pushes the boundaries of an already tipsy trend. As “bro-country” has its moment in the sun and radio call letters increasingly seem to be written in fraternity Greek, popular country seems to favor to a male-dominated hair of the dog agenda. Female duo Maddie & Tae asked, “how in the world did it go so wrong?” with “Girl in A Country Song,” while Maggie Rose on the same day announced, “I want to be the girl in your truck song, the one that makes you sing along.” The songs played on country radio seem to feel more pop, and although some have reached less-than-open ears, assumptions about country and the people that listen to it seem to be changing.

Some changes are more welcome than others. Sexual innuendos, drug references, and depictions of a nonstop party life have ruffled some country aficionados’ feathers. “Sun Daze,” a co-write between FGL’s Tyler Hubbard and Brian Kelley as well as Cary Barlowe, Jesse Frasure, and Sarah Buxton, announces, “if I’m lucky, yeah I might get laid,” and invites the girl to “pet on my Harley” while they “stick the pink umbrella in your drink.” Aside from getting stoned in the chorus, the duo also winks at other drugs with the “lace my J’s” line, which could read as a reference to more than just sneakers. The radio version of the song tones down the raciness, replacing “get stoned” with “stay home.”

FGL are far from the first country artists, outlaw or otherwise, to indulge in the finer sins. Waylon Jennings and Johnny Cash were early examples, as well as their outlaw country brethren. Willie Nelson is a marijuana connoisseur. Recently, Ashley Monroe’s “Weed Instead of Roses,” Kacey Musgraves’ “Follow Your Arrow,” and Eric Church’s “Smoke A Little Smoke” have been much-discussed and criticized for their drug references.

“Party, Bacardi, Repent, Repeat,” read the headline of Billboard’s October cover story on the duo. While FGL may seem more at home at a pool party than in a pew, the duo are men of the church. “By grace alone I am saved,” reads the tattoo on Tyler Hubbard’s wrists. In the video for “Sun Daze,” Hubbard sports a cross necklace more than a shirt.

“They both were inspired by church activities, loved Christian rock and more or less met in church,” the Billboard piece reads. “Country music has always balanced the sins of Saturday night with the penitence and reflection of Sunday morning, while rock’n’roll is all Saturday night, all the time. Pushing aside Nickelback and Nelly, that’s the most rock’n’roll thing about Florida Georgia Line. Says Hubbard, ‘We’re professional partiers.'”

“Ain’t nothin’ wrong with gettin’ my sun daze on,” FGL assert in the chorus. It’s the sin minus the penitence; as their Billboard story states, forever the rock & roll Saturday night. But the duo take it a step further, saying, “work a little less, play a little more / that’s what this day is for.” Defining what’s considered sinful and what isn’t is a dangerous thing, and in the case of Florida Georgia Line, it isn’t the point. The contradiction doesn’t lie within how they view their behaviors, it’s the fact that they’re asserting it’s the best way to spend one’s holy day. One might think a genre with a listener base that’s fundamentally Christian would take offense to the suggestion that Sunday is best spent getting high, or that the label might pause before pushing the song to radio.

However, it seems that, surprisingly, listeners aren’t reacting to the religious implications of the song’s message. Religion has far from vanished at country radio; Carrie Underwood’s “Something in the Water,” a song that’s heavily religious, recently reached #1 on the Billboard Hot Country charts and has sold 529,000 units to date, according to Nielsen Soundscan. “It wasn’t a worry to me at all,” Underwood told Glamour, in reference to the song’s acceptance by listeners. “Country music is different. You have that Bible Belt-ness about it. I’m not the first person to sing about God, Jesus, faith [or] any of that, and I won’t be the last. And it won’t be the last for me, either. If you don’t like it, change the channel.”

“Something in the Water” isn’t the only song showing faith’s importance at country radio. Kip Moore received criticism this year for his song “Dirt Road,” which contains the lyric “no, I don’t wanna go unless Heaven’s got a dirt road.” “Dirt Road” didn’t chart impressively, peaking at #35 on Hot Country and #44 on Country Airplay. “Of course you don’t take it literal,” he told Taste of Country. “I mean if I’m at the pearly gates and God says come on in, I’m not gonna say, ‘Nope not coming in unless you got a dirt road.’ The good thing about this song, at least it is pushing some buttons. It’s pushing buttons in a good way and a bad way. That’s fine with me.” Pushing buttons, whether among listeners, programmers, or creators engages dialogue – something that surprisingly, given that faith seems to remain important to listeners, FGL’s hit has failed to do.

Perhaps the duo have escaped criticism so far because their music and branding have set different expectations from listeners. Hubbard and Kelley aren’t exactly public figures that reek of religious role-model status, and country music – especially at radio, especially Florida Georgia Line – has started to sound increasingly pop, not just in composition, but in lyrical content as well. Writers are trading storytelling and specificity for broadly relatable themes and, with artists like FGL and their collaboration with Nelly on “Cruise,” hip-hop has made its way into country as well. While Sam Hunt is speak-singing his way through “Speakers,” FGL is embracing another side of the genre, where bottles and models are valuable, prominent, and at the end of the night, disposable. It’s lucrative – FGL earned $24 million last year – and has earned them a slew of awards including this year’s CMA for Vocal Duo of the Year and the AMA’s Favorite Country Band/Duo/Group. It’s possible that the best business includes their faith, still a staple of country, but puts it on hold to play the characters they play. If Sunday is made for getting stoned and getting laid, it’s safe to say the boys aren’t heading first to church.

Perhaps listeners don’t mind FGL’s allusions because they identify. Personal morality is often self-defined, and whether religiously inclined or not, life is a constant balance between making choices we stand by and ones we may come to regret. Finding solace in those making similar choices is one of the ways we connect with others, both on a morality level and otherwise – it’s why we follow that workout inspiration Instagram, go to the dog park, or shop at Urban Outfitters. As people choose how to live their lives in relation to their faith, those saving themselves for marriage will seek a supportive network, while those nursing a Saturday morning hangover will seek a similarly understanding group (and maybe a Gatorade). Kip Moore’s quietly released 2014 song “Hang A While” captures this perfectly, with the lyric “what I call a good time, some call sin.” As a man of faith, he’s accepted that his lifestyle choices may not be embraced by others of faith, but it doesn’t void his ability to be a good Christian – although there’s a nod to the fact that maybe it’s not the perfect life. Christianity states that no one is perfect – “surely there is not a righteous man on earth who does good and never sins” (Ecclesiastes 7:20) – and Moore’s lyric is a hand on your shoulder, saying, “I’m right there with you.”

Additionally, the listener demographic may be shifting. Despite Underwood’s assertion that country has a certain “Bible Belt-ness” to it, perhaps FGL’s listener base less resembles a typical country audience and shares more in common with listeners of other genres, like their oft-compared rock-brethren Nickelback or listeners that found them because of their top-40 hit with Nelly. “Community standards have indeed changed — particularly with the recent influx of younger listeners [and] a heavily shared audience between country and pop stations,” Bob Barnett, operations manager for Entercom’s Rochester, N.Y., radio cluster told Billboard in 2013 when asked about the increase in songs referencing marijuana on radio. It’s no secret that the genre as a whole has been growing in unexpected markets like New York City, which recently announced its first country music festival on Randall’s Island and a monthly country series, inaugurated with a performance by Luke Bryan, at Brooklyn’s Barclays Center.

For writers in Nashville, that’s both a gigantic opportunity and a gigantic challenge. Traditionally, country music has meant storytelling and lyrical specificity, qualities that are more rare in pop, a genre which seeks to relate on a more accessible, less specific level – compare the lyrics of Miranda Lambert’s hook, “won’t take nothin’ but a memory from the house that built me” with Icona Pop’s hook “I don’t care, I love it.” As artists like FGL continue to push the boundaries of what’s considered country and as the listener base continues to change, Music Row can reach a broader audience or fragment into sub-genres reflecting the increasingly diverse tastes of creators and listeners, perhaps at the expense of some of the values that have traditionally been pillars of country music.