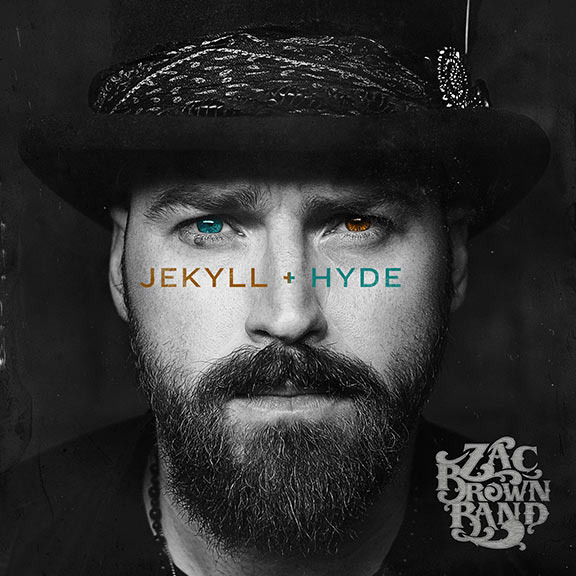 It’s a bit unfair to call Zac Brown just a country artist. Sure, it’s a shoe that fits, but to name him as such would be to call John Mayer simply a guitarist or Dave Grohl simply a drummer. With an artist like Brown, it’s a type of creative that spans multiple styles, much like filmmaker Woody Allen spans more than just comedy. It’s why he attracts a band that’s diverse, talented, and A-level; percussionist Daniel de los Reyes, for instance, has played for artists like Chicago, Earth Wind & Fire, Sheryl Crow, and Shakira. As the Zac Brown Band first fully demonstrated with The Grohl Sessions Vol. 1, their creative strengths extend beyond the (ever widening) confines of country.

With Jekyll + Hyde, ZBB blow the doors wide open. It’s tempestuous and unruly, it screams and it simmers. Nothing about the album can be boxed and roped with ribbon – it doesn’t fit nicely into a cohesive theme, and not all the songs hold hands. Even within songs – such as “Bittersweet” – the music begins with a lilting, harmony-heavy country ballad before crashing into a cragged coast of crunchy electrics and then ebbing, as suddenly as it started, back into its inceptive offering. But that’s exactly the point – Brown doesn’t ask for permission, he states it, staring down the listener with eyes of orange and turquoise.

Unlike the dual identities who serve as the namesake for the album, Brown’s Jekyll and Hyde don’t serve just two genres. While country and rock, genres Brown has previously explored, serve as lighthouses in a sonic storm, the album dabbles in a variety of genres. It’s country music’s Graceland, and not just because it too draws at times on South African rhythms and styles. But Brown and the rest of his eight-member band weave seemingly disparate styles seamlessly into a sound that still feels naturally his own, much as the 1986 classic taught ‘world’ and ‘pop’ to shake hands.

And disparate they truly are. The record leads with “Beautiful Drug,” a rhythm-heavy tune that draws simultaneously on the frenzies of bluegrass and Avicii. “Mango Tree,” which follows Brown’s recent country #1 “Homegrown” on the track listing, features a swing tempo, big-band brass, and a Sara Bareilles duet that could easily have been plucked from Sinatra’s branch. “Mango Tree” slides smoothly to a close with 1950’s sheen, leading immediately into “Heavy Is The Head,” a dirty electric crunch that recalls the 90’s spirit dominated by the song’s featured artist, Chris Cornell. Lest one feel too lost at sonic sea, Jekyll + Hyde lands on a desert island with “Castaway,” which feels like the sister song (rolled ‘r’ of ‘rum’ included) of the band’s hit “Jump Right In.”

Not that it’s always transcendent. “Tomorrow Never Comes,” for instance, feels at times distracted with jumpy synths and high electrics, and would read stronger as a ZBB classic, uptempo, fun, and harmonically focused – compare with the emotive acoustic version that closes the album, introducing a simple live-it-up to the more desperate side of reckless abandon. Some of the treatments of the songs lean unnecessarily pop or experimental, distracting from the strength of the song. And while songs like “I’ll Be Your Man (Song For A Daughter)” might have had a shot at being the album’s “Colder Weather” moment, the island-y production doesn’t quite click with the heartfelt and somber moment.

However, for all its novelty, Jekyll + Hyde also retains some of its classic ZBB flavor. “Wildfire,” co-penned by fellow caution-to-the-wind thrower Eric Church; “Castaway;” and new single “Loving You Easy” serving as shining examples. “Remedy” is perhaps the album’s strongest track, as it straddles those lines fluidly, feeling like a ZBB classic washed in a mixture of African drums and uilleann pipes, building to a country-gospel reckoning both intimately and expansively moving. Songs like “Wild Child” and the Cee-Lo Green co-produced “One Day” also draw heavily on the band’s signature country sound, though they too are sonically explorative. Brown rounds out the album with “Dress Blues,” a heart-wrenching Jason Isbell cover, and “Junkyard,” which employs bits of Pink Floyd’s “Is There Anybody Out There.”

Because it so strongly swerves from the safe and expected, Jekyll + Hyde won’t be for everyone. But what Brown and his band have done with this album truly raises genre-stringent eyebrows before settling them into satisfaction, and as the reception of its vastly diverse releases has already shown, it should meet with success.