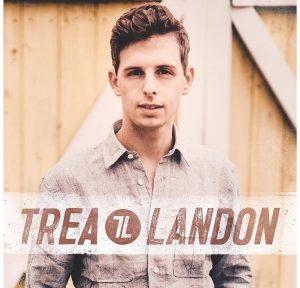 Hailing from a very small town in Southern Georgia, Trea Landon from all accounts seems to be headed toward a very promising career in country music. After only a short time in Music City, Landon has already landed a publishing deal with Play It Again Publishing after catching the ear of hit-maker Dallas Davidson. We caught up with the rising star recently to find out more about his story.

Landon grew up on 30 acres of land in the small town of Claxton, GA and was introduced to his country music idols such as Randy Travis, George Strait, and Hank Williams by his parents and grandparents.  Growing up, he loved to play the drums and was (and still is) a huge metal/rock fan, listing Linkin Park and Metallica as some of his favorite bands. It wasn’t until the age of 16 that he picked up a guitar. His grandfather taught him 3-4 chords and he says that was all it took to get him hooked.   The transition from self-proclaimed shower singer to actually singing in public was relativly quick. He and his band started played local bars and venues, which quickly translated into playing all over the Southeastern portion of the United States.

Making the decision to leave his family and head to Nashville to pursue his dreams did not come easily. “I come from a very small family, I moved to Nash when I was 21, the first time I ever had a thought to move I was 18 but something always came up,” he says.  “Looking back on it, I realized I was making excuses. I would talk myself into coming and then there was always something else coming up. I come from small town and a small family. You have an image that after high school your friends were going to stay here and all go through life together but then you realize how easy it is to move on with life.”  He says he finally made the decision that it was time to make the was after the divorce of his parents.

Landon moved to Nashville in 2015 and it wasn’t long before his talent was noticed.  The brother of Dallas Davidson saw him play during a songwriters night at the Tin Roof, and just a few days later he got a call from Davidson. The two met and quickly inked a publishing deal. Landon’s career has been proceeding at a record pace. He’s already written with some of the biggest names in the business such as Davidson, Craig Campbell, Chris Young, and Rob Hatch. He admits that learning the benefits of the co-writing process took a bit of adjustment, after all he was signed based on songs he’d written by himself. “It may take 100 people before you find the 2-3 who you work best with,” he says, and has learned that “the best song wins,” even if he isn’t the writer.

Landon’s sound can be described as a combo of early Luke Bryan and Jon Pardi and says his shows are always high energy and upbeat. He likes to throw in some classic covers of 90’s country music hits.  Having already opened for Craig Campbell, Jon Langston, Clare Dunn, Parmalee, Luke Combs, Chase Rice, and Ryan Kinder he’s quickly finding his comfort zone on stage.

2017 has been a great one so far for Landon, who released first self-titled debut album on June 9th. The first two singles leading up to the release of the EP have been very successful. “A Little Bit” debuted on the New Boots Spotify Playlist the day of release and the following Friday “When I Get There” was released. SiriusXM The Highway featured it on their On The Horizon show the next day.

Some highlights of his young career so far have been the success of the EP and first two releases as well as playing the 2017 CMA Music Festival where he performed on the Gildan Stage at The Hard Rock. In addition, he traveled to the U.K. earlier this year where he performed at the Country To Country Music Festival. Recently, while out out on the road with Craig Campbell, Landon was humbled as he watched Campbell play one of his songs at the Faster Horses Music Festival in Michigan in front of a crowd of approximately 30,000 people.   Landon describes these moments as “Magnificent”.  He says, “There are still days I get up and feel like I haven’t done enough.  But honestly, I’m not taking whats happen to me for granted. I’m very proud of my accomplishments and I am very blessed.”

What’s ahead for this young up and coming star? For now he’s enjoying the success of his debut EP and continues to write. He is currently making plans to head out on the road this fall playing shows on the college town and says he’s had a lot of label interest.

Trea Landon is available for purchase via iTunes.