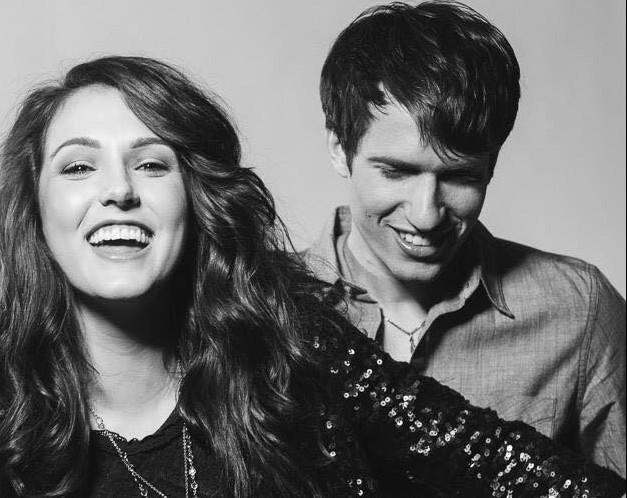 Jennifer Fielder and Trey Smith are SmithField, the Texas duo with a signature pop-country sound and harmonies that fit together effortlessly, for an offering that’s distinct and appealing to radio. We caught up with them to chat about their journey to becoming a duo, their distinct writing styles, and the record they’re currently working on.

Tell me a little of your backstory… you grew up together, right?

Jennifer: Yep! We met when I was ten and he was 12, so and our families would do a New Year’s Eve party year and a 4th of July party, so we’d see each other twice a year. Then he moved off to Houston so in high school we weren’t super close, but he reached out to me in college and asked me if we wanted to sing together. At first I was totally against it.

Trey: It was more of a one off thing at first, I didn’t really ask, do you want to be a duo or anything, I just said hey, let’s play a show together just for fun, just to see how it goes.

At that time, were you both doing separate musical things?

J: I grew up on the stage, since I was 9 years old I was playing in Oprys, but they were all cover songs, so I never knew who I was as an artist, I was just Jennifer the singer, you know? But in college I started to dig into songwriting a little bit, and he came in right at the right time.

T: I grew up not on the stage – I grew up playing songs up in my room where no one could hear me. In fact, none of my peers, nobody actually knew I could sing or play music until I was about 18 years old. I literally was shut in, I’d practice upstairs and stuff, and somebody signed me up for a high school talent show – against my will, mind you – so I was forced into the situation. There was a talent part and I had to pick a talent, so I was like, that’s the only thing I feel like I might be good at, so let me try it. And it went great, and then of course as an 18 year old boy, I was like why didn’t I do this earlier? Then I went through college, was part of an alternative rock band for a few years, and then that eventually kinda..

J: Five guys, they broke up…

T: Everybody’s got their different directions and ideas and stuff, and we just kind of got to the time where we just went our separate ways. I was just kind of going at it solo for a while there, the singer-songwriter kind of open mic nights and stuff, and then I was having lunch with my cousin one day, who’s a mutual friend of ours, and she suggested we try singing together sometime. So I was like yeah whatever ok, reached out to her and got together and the rest is, where we ended up today.

How did you decide you were switching to country?

T: I have a very eclectic taste in music, like I was doing alternative rock – I love rock music – but I grew up on like Garth Brooks, loved his stuff, loved Keith Urban’s stuff, so I always kind of loved that kind of style of writing and was definitely into it. She was already doing it, so it just kinda made sense, that’s what we kind of naturally gravitated towards.

J: I wasn’t gonna do anything else but country, so I was like, sorry!

T: At the time w were getting together the Lady A’s and stuff were starting to get together…

T: I’ve always been a sucker for harmonies and love doing all that.

J: It’s just a really cool thing that you can have two great singers but they don’t always sound good together, and so I knew that the first time we sang together, I was like wow. I didn’t even want to be a duo, I did it because it felt right.

How do you balance your influences and styles when you’re writing? Do you do a lot of co-writes?

T: We usually co-write… Obviously in the beginning we wrote a bunch more stuff just the two of us because we’d never heard of this thing called co-writing, then we moved to Nashville, and that’s just what you do.

I think we typically go in with the intent to write something for us, but the song takes a turn, we’re not trying to absolutely force it into a duet, absolutely force it into something for us. If it takes a turn to something else, then we try to make it the best song we can and say hey, it’s great song but it’s not for us, let’s go pitch it. We don’t just write duets, we write for the female solo, or the male solo too.

T: It’s funny cuz every time I tell someone we’re a duo one of the next questions is, ‘Who’s the lead singer?’ I feel like with duos it’s very much one or the other, but we’ve done a really good job I feel like of making it a true duet in that it’s typically very even.

You’ve been touring and opening for artists including Scotty McCreery and Eric Paslay. When you’re not on the road, are you writing?

J: We’re working on a brand new record, which is so exciting. Bigger Picture folded and a lot of messy things happened and we weren’t particularly happy with things. I think everything revolves around a good project, so that’s what we’re working towards.

Previous Post: Kelsea Ballerini Reveals Track Listing for Debut ‘The First Time’
Next Post: Song of the Day: “Done.” by The Band Perry