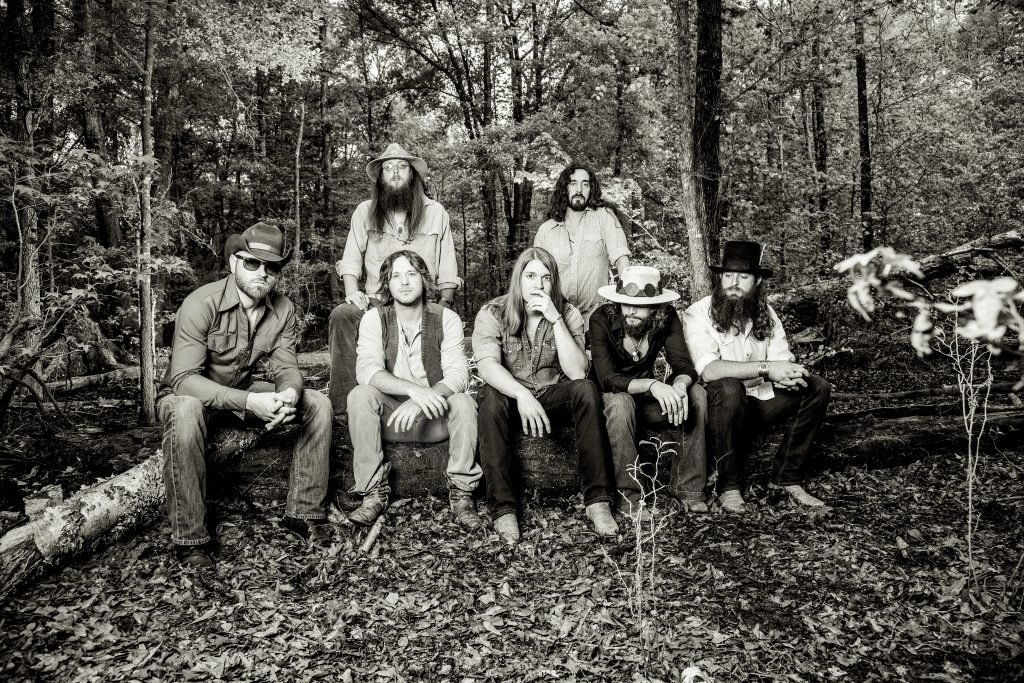 If you’re looking for an electric crunch with a touch of fiddle, a rocking energy with a wailing Southern vocal, and lyrics that hit hard and resonate deeply, Whiskey Myers deserve a first, and repeated, listens. The band, who hail from Texas, just released their fourth studio album Mud, a Southern rock offering of grit and fire.

The band, composed of Cody Cannon, Cody Tate, John Jeffers, Gary Brown, and Jeff Hogg, recorded the album in Nashville with red-hot producer Dave Cobb, known for working with left-of-center-lighthouses Chris Stapleton, Sturgill Simpson, and Jason Isbell. Whiskey Myers spent just shy of two weeks in the studio with Cobb, working out many of the final versions of the songs in the studio.

“He likes us to come in like that for some reason, unprepared, he likes us creating on the spot,” lead singer and band leader Cody Cannon says. “So that’s a little frustrating cause I’ll be up in a hotel room at like four o’clock in the morning trying to figure out the last verse to a song or something like that. But it kind of pushes you and makes you do a better job. He’s great to work with, he’s laid back, got a good attitude in the studio that’s always positive, got a great ear for music.”

The result is a ten track offering that bottles the group’s live energy and knows when to step away for the rawer moments. “Stone” finds the album at its most somber, while closer “These Are Still The Good Old Days,” featuring Brent Cobb, is a beer-raising, drinking-buddy singalong. “Frogman,” a co-write with the Black Crowes’ Rich Robinson, evokes Chris Cornell sensibilities.

“We didn’t even know really what it as gonna be about until halfway through it,” Cannon says of “Frogman.” “We kinda figured it out, and then we went back and changed some the lyrics and stuff to make it about that story. I have a couple of my buddies who are in the Navy SEALs and I hung out with them recently and it was just kind of, the stars aligned to write a song to kind of pay tribute to people like that.”

There isn’t much of a routine to Cannon’s writing – from the melody to the idea or lyrical content, he’s most comfortable just sitting at a guitar and seeing what happens. “I just gotta sit down and do it, so if I can make myself do that I always seem to end up okay,” he says. “I just gotta make myself sit down and start writing and playing. Sometimes [ideas will] come into my head when I’m laying in bed and I can’t sleep. A lot of songs and melodies or ideas that ended up being songs, like “Trailer We Call Home,” came up with that in my sleep or when I was trying to sleep and “Dogwood” and stuff like that. A lot of those popped in my head when I couldn’t sleep.”

“It’s amazing, if you’re writing a good song like that you’re like, alright, where the hell did that come from, that’s fucking cool, you know?” he continues, laughing. “I’m not that smart, how did I come up with that?”

Though it seems Cannon would credit much of his inspiration as appearing out of thin air, it’s air that’s textured by the band’s surroundings and Cannon’s dexterity in putting them to song. “I’m kind of from the woods, so I like to write about that, or real stuff, I like to write about honest stuff, the stuff you see,” he says, “cause that’s what you know, it kind of comes out that way.” “Lightning Bugs and Rain” evokes a visual as strong as the groove, and “Deep Down in the South” extolls Muscle Shoals, catfish, transistor radios with heavy electrics and howling vocals.

The band describes themselves as rock with country flavor, a boot that fits well given their recent opening slot on the Carnival of Madness Tour, featuring Shinedown, Black Stone Cherry, and Halestorm. “It’s been good, everybody’s been great on this tour,” Cannon says.

Whiskey Myers have been together for nine years and have built a fiercely loyal following. “It just kind of snowballed and happens,” Cannon says. “I guess what worked for us is just being real, just going out there and doing our thing, not trying to copy people or do something cause it’s on the radio, it’s the cool thing to do this summer or some shit like that. We just go out and do our thing.”

Catch them on tour doing their thing this fall, and grab your copy of Mud.